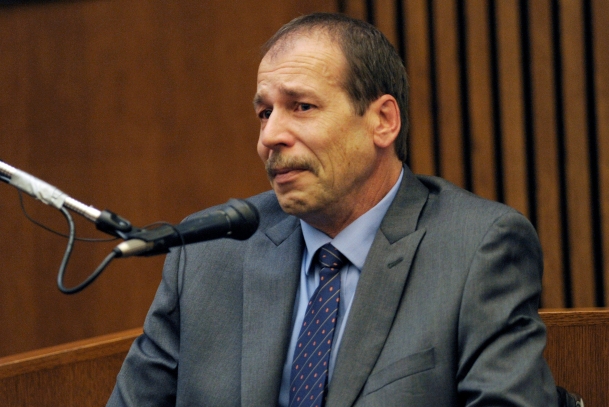 PHOTO: Theodore Wafer testifies in his own defense during the seventh day of testimony for the Nov. 2, 2013, killing of Renisha McBride, Monday, Aug. 4, 2014, in Detroit. He said he feared for his life when he fired at McBride on his porch in Dearborn Heights, Mich. Wafer is charged with second-degree murder and could be sentenced to up to life in prison with the chance for parole, if he's convicted. (AP Photo/Detroit News, Clarence Tabb Jr.)

DETROIT (AP) — A jury convicted a suburban Detroit homeowner of second-degree murder and manslaughter Thursday in the killing of a drunk, unarmed woman on his porch last year, rejecting his claim that he was afraid for his life and had acted in self-defense.

Theodore Wafer, 55, shot Renisha McBride through a screen door on Nov. 2, hours after she crashed into a parked car a half-mile from his house. No one knows why she ended up at the Dearborn Heights home, although prosecutors speculated that the 19-year-old woman may have been seeking help.

The jury convicted Wafer of second-degree murder and manslaughter after deliberating for about eight hours over two days.

Wayne County Judge Dana Hathaway warned that she would lock people up for any outbursts, and the courtroom was silent after the verdict was read.

McBride's mother, Monica McBride, cried and clasped her hands as if praying when the jury's decision was announced. She gave long hugs to prosecutors as the courtroom emptied.

Wafer, who had been free on bond, was ordered to jail to await his sentence. He faces up to life in prison on Aug. 21, but it's likely his punishment will be much shorter.

"He was a cold-blooded killer. ... People have a right to bear arms, but you need to do it with reason and responsibility," McBride's father, Walter Simmons, told reporters.

During closing arguments Wednesday, prosecutor Patrick Muscat told the jury that McBride "just wanted to go home" the morning she was killed.

"She ended up in the morgue with bullets in her head and in her brain because the defendant picked up this shotgun, released this safety, raised it at her, pulled the trigger and blew her face off," Muscat said, holding the gun.

Wafer, an airport maintenance employee who lives alone, said he was roused out of sleep around 4:30 a.m. by pounding at his front and side doors. He testified that the noises were "unbelievable."

"I wasn't going to cower in my house," Wafer said.

He said he thought there could have been more than one person outside of his 1,100-square-foot home near the Detroit-Dearborn Heights border. Wafer said he pulled the trigger "to defend myself. It was them or me."

"He armed himself. He was getting attacked," defense attorney Cheryl Carpenter told jurors. "Put yourselves in his shoes at 4:30 in the morning."

But prosecutors said Wafer could have stayed safely in his locked home and called 911 instead of confronting McBride.

"He had so many other options. ... We wouldn't be here if he had called police first," Muscat told the jury.