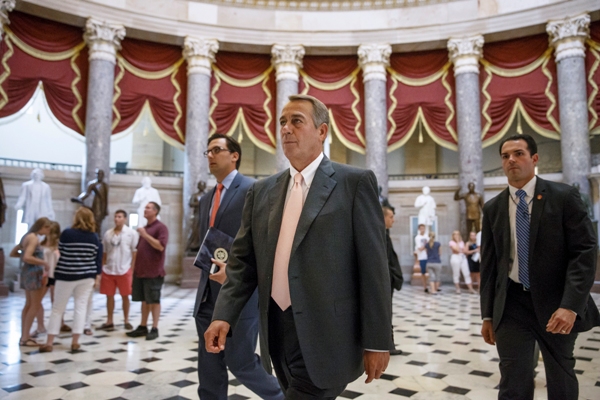 PHOTO: House Speaker John Boehner of Ohio strides to the House chamber on Capitol Hill in Washington, Wednesday, July 30, 2014, as lawmakers prepare to move on legislation authorizing an election-year lawsuit against President Barack Obama that accuses him of exceeding his powers in enforcing his health care law. Democrats have branded the effort a political charade aimed at stirring up Republican voters for the fall congressional elections. They say it's also an effort by top Republicans to mollify conservatives who want Obama to be impeached — something Boehner said Tuesday he has no plans to do. (AP Photo/J. Scott Applewhite)

WASHINGTON (AP) — A sharply divided House has approved a Republican plan to file an election-season federal lawsuit against President Barack Obama. The suit will contend that Obama has exceeded his constitutional powers in the way he has enforced the 2010 health care law. The vote was 225 to 201.

Democrats say the suit is a campaign-year stunt designed to draw conservative voters to the polls in congressional elections. They also say it may be a prelude to an effort to impeach Obama — a contention top Republicans say is groundless.

Republicans say Obama has gone too far in selectively enforcing parts of the health overhaul, such as by delaying the requirement that many employers provide health insurance for their workers. They say they are protecting the Constitution's division of powers.