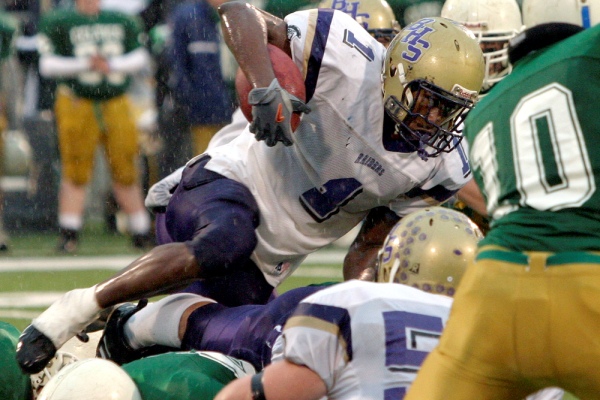 In this Nov. 27, 2004 file photo, Bloomington High School running back Adrian Arrington tries to clear a pile of Providence Catholic defenders during the Class 6A championship football game in Champaign, Ill. Arrington, who later went on to play at Eastern Illinois in Charleston, is the lead plaintiff in a class-action head injury lawsuit working its way through federal court in Chicago. The NCAA and the plaintiffs announced a settlement on Tuesday, July 29, 2014. (AP Photo/ Stephen Haas, File)

CHICAGO (AP) — The NCAA agreed Tuesday to settle a class-action head-injury lawsuit by creating a $70 million fund to diagnose thousands of current and former college athletes to determine if they suffered brain trauma playing football, hockey, soccer and other contact sports.

College sports' governing body also agreed to implement a single return-to-play policy spelling out how all teams must treat players who received head blows, according to a filing in U.S. District Court in Chicago. Critics have accused the NCAA of giving too much discretion to individual schools about when athletes can go back into games, putting them at risk.

Unlike a proposed settlement in a similar lawsuit against the NFL, this deal stops short of setting aside money to pay players who suffered brain trauma. Instead, athletes can sue individually for damages and the NCAA-funded tests to gauge the extent of neurological injuries could establish grounds for doing that.

The settlement applies to all men and women who participated in basketball, football, ice hockey, soccer, wrestling, field hockey and lacrosse. Those who've played at any time over the last half-century or more at one of the more than 1,000 NCAA member schools qualify for the medical exams.

Tuesday's filing serves as notice to the federal judge overseeing the case the parties struck a deal after nearly a year of negotiations, which Joseph Siprut, the lead plaintiffs' attorney who spearheaded talks with the NCAA, said were sometimes tough.

"I wouldn't say these changes solve the safety problems, but they do reduce the risks," the Chicago attorney said. "It's changed college sports forever."

The NCAA, which admits wrongdoing in the settlement and has denied understating the dangers of concussions, hailed the settlement.

"This agreement's proactive measures will ensure student-athletes have access to high quality medical care by physicians with experience in the diagnosis, treatment and management of concussions," NCAA's chief medical officer Brian Hainline said.

Siprut added that stricter rules and oversight should help ensure the viability of football by allaying fears of parents currently inclined to not let their kids play.

"Changes were necessary to preserve the talent well of kids that feeds the game of football," he said. "Absent these kinds of changes, the sport will die."

To keep the NCAA from having to hold unwieldy talks with multiple plaintiffs, 10 lawsuits filed nationwide were consolidated into the one case in Chicago, where the first lawsuit was filed in 2011.

The lead plaintiff is Adrian Arrington, a former safety at Eastern Illinois. He said he endured five concussions while playing, some so severe he has said he couldn't recognize his parents afterward. Subsequent headaches, memory loss, seizures and depression made it difficult to work or even care for his children, filings said.

Another named plaintiff is former Central Arkansas wide receiver Derek K. Owens. After several concussions, he said he found he could no longer retain what he had just studied. His symptoms became so severe he dropped out of school in 2011, telling his mother: "I feel like a 22-year-old with Alzheimer's."

Among other settlement terms, all athletes will take baseline neurological tests to start each year to help doctors determine the severity of any concussion during the season; concussion education will be mandated for coaches and athletes; and a new, independent Medical Science Committee will oversee the medical testing.

Critics said the agreement lets the NCAA off too easy.

One former UCLA linebacker, Ramogi Huma, said the parties should have followed the lead of the NFL settlement by laying aside money for damages.

"The deal falls painfully short of what players need — comprehensive reform," said Huma, who is president of the College Athletes Players Association. "I know there is some limit for what the NCAA can do. But zero dollars is unacceptable."

The plaintiffs cited a 2010 internal NCAA survey that found almost half of college trainers put athletes with signs of a concussion back into the same game.

But the NCAA has cited recent changes in equipment, medical practices and playing rules, including ones prohibiting football players from targeting an opponent's head or neck.

It also announced in May a three-year, $30 million concussion study co-funded by the U.S. Defense Department. Plans call for initial data collection on about 7,200 athletes from 12 colleges, increasing to 37,000 athletes at 30 sites, with the aim of better understanding concussions and developing better prevention methods.

The settlement is still subject to approval by U.S. District Judge John Lee, in a process that could take months. He must grant preliminary approval and then, after affected athletes weigh in, give a final OK.

Plaintiffs' filings say the number of athletes who may require testing to learn if they suffered long-term damage runs into the tens of thousands. They cite NCAA figures that from 2004 to 2009 alone, 29,225 NCAA athletes suffered concussions.

Internal emails unsealed in the lawsuit illustrate how pressure mounted on the NCAA over the issue.

In a Feb. 23, 2010, email, the NCAA's director of government relations, Abe Frank, wondered whether debates about new safeguards for young children playing contact sports would crank up the pressure on the NCAA to do more.

David Klossner responded bluntly a few hours later. "Well since we don't currently require anything all steps are higher than ours," he wrote.

Later that year, the NCAA did establish a new head-injury policy that requires each school to have a concussion management plan on hand and it states that athletes should be kept from play for at least a day after a concussion.

But plaintiffs blamed a tendency of some teams to hurry concussed players back into games, in part, on the NCAA's lax enforcement of the concussions policy.

In a 2012 deposition, asked if any schools had been disciplined for having subpar concussion plans, Klossner said, "Not to my knowledge."