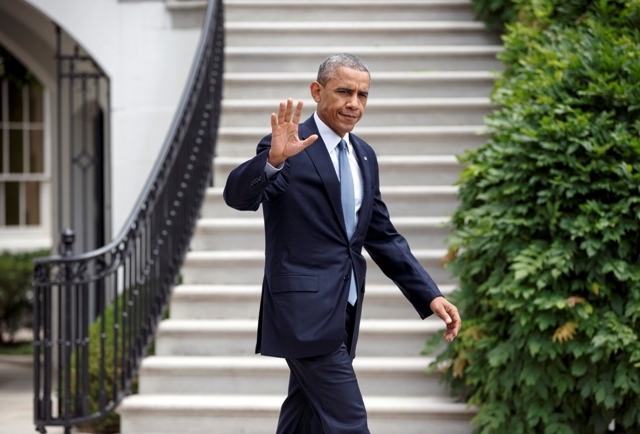 This July 22, 2014, file photo shows President Barack Obama as he departs the White House to board Marine One in Washington. The last time Republicans unleashed impeachment proceedings against a Democratic president, they lost House seats in an election they seemed primed to win handily. Memories of Bill Clinton and the campaign of 1998 may explain why Speaker John Boehner and the current GOP leadership want no part of such talk now. (AP Photo/J. Scott Applewhite, File)

Memories of Bill Clinton and the campaign of 1998 may help explain why Speaker John Boehner and the current GOP leadership want no part of such talk now, although conservatives increasingly clamor for it. And also why President Barack Obama's White House seems almost eager to stir the impeachment pot three months before midterm elections.

Republicans have already "opened the door for impeachment" with their plans to sue the president over allegedly failing to carry out the health care law, White House aide Dan Pfeiffer told reporters. In something of a dare last week, he also said any further action Obama takes on his own on immigration will "up the likelihood" of a GOP-led move to remove Obama from office.

Pfeiffer and Democratic fundraisers aren't privy to the inner workings of the House Republican leadership. Boehner, who is, insists at every public opportunity that the lawsuit is one thing, impeachment is another — and not on the table. The planned suit results from a dispute over the balance of powers between the president and Congress, he said last month, and the House "must act as an institution to defend the constitutional principles at stake."

Republicans dispute suggestions by Democrats that the suit's true purpose is to release pressure from the party's more extreme supporters for impeachment.

One Republican committee chairman, Rep. Pete Sessions of Texas, said in a brief interview that Clinton deserved to be impeached, but Obama does not.

The 42nd president "broke the law," he said of formal allegations that accused Clinton of lying under oath to a grand jury and obstructing justice in connection with his relationship with White House intern Monica Lewinsky.

Contrasting the former president with the current one, Sessions said: "Breaking the law is different from not fully enforcing the law."

Sessions spoke a few hours after he opened a meeting of the House Rules Committee with what could well have been a case for impeachment: sweeping allegations that went far beyond the boundaries of the planned lawsuit.

"The president has unilaterally waived work requirements for welfare recipients," the Texas Republican said. The chief executive "ended accountability provisions in No Child Left Behind," an education law dating to the George W. Bush era, he said.

The president "refused to inform the Congress of the transfer of what is known as the Taliban five," Sessions went on. "And ignored the statutory requirements of the Affordable Care Act," he said, using the formal name for the 4-year-old health care law.

However compelling the complaints, no judge will ever rule on most of them.

Three months before the November elections, Republicans intend to limit their lawsuit to a narrower claim, that he has failed to faithfully carry out the health care law that, according to polls, remains poorly received by the public.

"In 2013, the president changed the health care law without a vote of Congress, effectively creating his own law by literally waiving the employer mandate and the penalties for failing to comply with it," Boehner said in a statement last month. "No president should have the power to make laws on his or her own."

Republican officials say they decided to narrow the focus of the court case after being advised by lawyers that their chances of succeeding would be stronger.

None of this seems likely to satisfy the political right, as 2008 vice presidential candidate Sarah Palin recently made clear. "It's time to impeach; and on behalf of America we should vehemently oppose any politician on the left or right who would hesitate in voting for articles of impeachment," she wrote.

Yet her opinion is not widely shared among non-Republicans, and Democrats quickly sought to use calls like the one from Palin to raise campaign funds.

In a CNN survey last week, more than half of all Republicans said they favor Obama's impeachment, but that level that fell to one-third of the overall electorate. Among independents, 63 percent opposed it.

A lawsuit is also generally unpopular, but less so than impeachment would be, the poll indicated.

When it came to the lawsuit, 41 percent of the country backed it. Support was 75 percent among Republicans, while independents opposed it by 43-55.

As a junior member of the leadership in 1998, Boehner had a seat at the table when Republicans decided to inject Clinton's impeachment into that year's elections.

Republicans held their majority, but Democrats gained five seats, a rarity in midterm elections for the party in power in the White House.

Clinton was impeached in a post-election session of the House, later acquitted in the Senate and remained in office. Then-Speaker Newt Gingrich fared worse. Under pressure from his rank and file, the Republican gave up his post and left Congress soon after the election debacle.

In the upheaval, Boehner lost his leadership post for a decade.