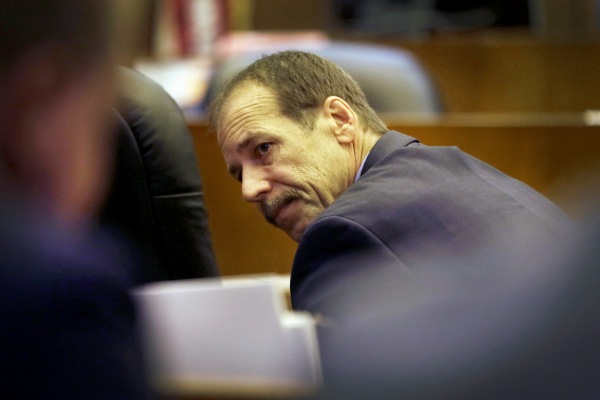 PHOTO: Theodore Wafer waits for the start of his trial at the Frank Murphy Hall of Justice, Wednesday, July 23, 2014 in Detroit. Wafer is charged with murder in the shooting of a young unarmed woman on his porch. (AP Photo/Carlos Osorio)

DETROIT (AP) — A suburban Detroit man who killed an unarmed woman on his porch was rocked out of sleep by a series of "boom, boom, boom" pounding sounds outside his home, causing him to grab a shotgun, open the front door and fire, a defense lawyer told jurors during opening statements Wednesday.

Theodore Wafer is on trial and claiming self-defense in the death last year of Renisha McBride, 19, in Dearborn Heights. But prosecutors have charged the 55-year-old with second-degree murder, saying there was no reason to use deadly force instead of calling police.

Defense attorney Cheryl Carpenter repeatedly told jurors that they need to put themselves in Wafer's shoes. Raising and lowering her voice for dramatic effect, she portrayed him as a man under siege in his own home around 4:30 a.m. on Nov. 2.

Wafer and McBride didn't know each other. She ended up on his porch 3 ½ hours after crashing her car into a parked car about a half-mile away in Detroit. An autopsy found her blood-alcohol level was about 0.22, which is nearly three times above Michigan's legal limit for driving.

"His heart is coming out of his chest. ... There's a shadowy figure coming off the porch and going to the side of the house. He thinks it's not one person; it's two or more people," Carpenter told the jury.

The banging continued and was so severe that the "floor was shaking, the picture window was rattling," she said, so Wafer eventually loaded his shotgun, opened the front door and fired, hitting McBride in the face.

Carpenter didn't tell the jury whether Wafer will testify or whether his version of events will be relayed during the testimony of police officers who interviewed him extensively after the shooting.

She said a defense expert will testify that Wafer's screen door was badly damaged by McBride before he shot through it.

Prosecutor Danielle Hagaman-Clark said Wafer had other choices when McBride arrived. She displayed a cheerful picture of the victim on a screen, followed by a photo of her dead body on the blood-stained porch.

"His actions that night were unnecessary, unjustified and unreasonable," Hagaman-Clark told the jury.

She said there was no evidence of an attempted break-in, and any damage to the screen was from the shooting — not McBride.

The jury heard four witnesses on the first day of testimony, including an officer who was sent to the home when the shooting was reported. Cpl. Ruben Gonzalez said Wafer was "absolutely" cooperative and placed without handcuffs in a squad car.

Carmen Beasley described events hours before the shooting, recalling how she found McBride bleeding and pressing her hands to her head after the car crash. McBride walked away before an ambulance arrived.

"I assumed she was drunk. ... She just kept saying she wanted to go home," Beasley said.

It took two days to pick a jury of seven men and seven women, including two alternates. Four are black. Judge Dana Hathaway asked them their views on race, guns and self-defense. McBride was black while Wafer is white.