Why Did Executions in Arizona, Ohio and Oklahoma Go Wrong? 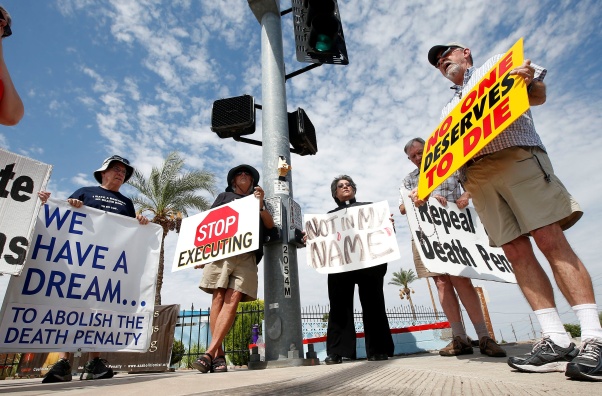 John Zemblidge, right, of Phoenix, leads a group of about a dozen death penalty opponents in prayer as they protest the possible execution of Joseph Rudolph Wood at the state prison in Florence, Ariz. on Wednesday, July 23, 2014. Arizona's highest court on Wednesday temporarily halted the execution of the condemned inmate so it could consider a last-minute appeal. The Arizona Supreme Court said it would consider whether he received inadequate legal representation at his sentencing. The appeal also challenges the secrecy of the lethal injection process and the drugs that are used. (AP Photo)

Since the start of the year, executions in Ohio, Oklahoma and Arizona have gone awry, with inmates gasping for breath as lethal drugs coursed through their bodies. The Associated Press had witnesses at the executions of the three inmates. A look at how each unfolded:

ARIZONA: Joseph Rudolph Wood was convicted of fatally shooting Debbie Dietz, 29, and her father, Gene Dietz, 55, at their auto repair shop in Tucson in 1989. He was executed on Wednesday.

OKLAHOMA: Clayton Lockett was convicted of shooting Stephanie Nieman, 19, with a sawed-off shotgun and watching as two accomplices buried her alive in 1999. He was executed on April 29.

OHIO: Dennis McGuire was sentenced to die for raping and stabbing to death Joy Stewart, a pregnant newlywed, in 1989. He was executed on Jan. 16.

ARIZONA: Wood looked around the death chamber and glanced at the doctors as they made preparations for his execution Wednesday in Florence, Arizona. They located veins and inserted two lines into his arms.

OKLAHOMA: Lockett's execution was slightly delayed. Also, while the procedure typically calls for one IV to be inserted into each arm, the medical team had difficulty finding a suitable vein and instead opted for a single IV into Lockett's groin that was covered with a sheet.

OHIO: McGuire, strapped to the gurney as members of the execution medical team inserted intravenous needles into his arms, spoke several times. The prisons spokeswoman said he repeatedly thanked the leader of the execution team.

ARIZONA: Wood looked at the family members as he delivered his final words, saying he was thankful for Jesus Christ as his savior. At one point, he smiled at them, which angered the family. "I take comfort knowing today my pain stops, and I said a prayer that on this or any other day you may find peace in all of your hearts and may God forgive you all," Wood said.

OKLAHOMA: When asked if he had any final words, Lockett simply responded: "No."

OHIO: McGuire then thanked Stewart's family members, who witnessed the execution, for their "kind words" in a letter he apparently received from them. "I'm going to heaven. I'll see you there when you come," he said.

ARIZONA: About 10 minutes after the drugs were injected, the gasping began. Wood's jaw dropped, his chest expanded, and he let out a gasp. The gasps repeated every five to 12 seconds. They went on and on, hundreds of times. An administrator checked on him a half-dozen times. He could be heard snoring loudly when an administrator turned on a microphone to inform the gallery that Wood was still sedated, despite the audible sounds.

OKLAHOMA: After Lockett received the first drug, midazolam, and was determined to be unconscious, the second and third drugs were administered. A few minutes later, Lockett began writhing on the gurney, mumbling, breathing heavily and straining to lift his head from a pillow.

OHIO: McGuire appeared unconscious but gasped repeatedly as he lay on a gurney, his stomach rising and falling and his mouth opening and shutting. McGuire's execution lasted 26 minutes, the longest of any in Ohio to date. What was particularly unusual was the five minutes or so that McGuire lay motionless on the gurney after the drugs began flowing, followed by a sudden snort and then more than 10 minutes of irregular breathing and gasping. Normally, movement comes at the beginning and is followed by inactivity. It remains unclear what McGuire experienced, although it was clearly much different than any other execution where the needles were inserted properly.

ARIZONA: As the episode dragged on, Wood's lawyers frantically drew up an emergency legal appeal, asking federal and state courts to step in and stop the execution.

OKLAHOMA: As Lockett continued to struggle on the gurney, the prison warden ordered the blinds lowered that allowed witnesses to see inside the death chamber. After learning there was a problem with the IV and that some of the drugs had leaked into Lockett's tissue or out of his body, the state's prison director called a stop to the execution.

OHIO: McGuire's daughter, Amber McGuire, watched his final moments. "Oh, my God," she said as he gasped and breathed irregularly.

ARIZONA: Wood's gasps lasted about an hour and a half. His breathing slowed and he took his final breath. Soon after, Arizona Department of Corrections Director Charles L. Ryan declared Wood dead.