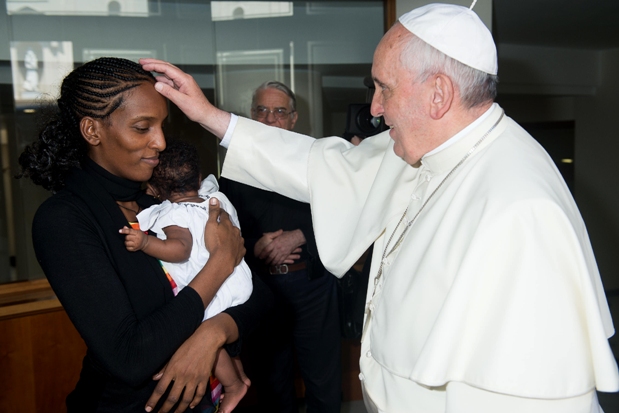 In this photo from the Vatican newspaper L'Osservatore Romano, Pope Francis meets Meriam Ibrahim, from Sudan, with her daughter Maya in her arms, in his Santa Marta residence, at the Vatican, Thursday, July 24, 2014. The Sudanese woman who was sentenced to death in Sudan for refusing to recant her Christian faith has arrived in Italy along with her family, including the infant born in prison. Ibrahim, whose father was Muslim but whose mother was an Orthodox Christian from Ethiopia, was sentenced to death over charges of apostasy. She married her husband, a Christian, in a church ceremony in 2011. (AP Photo/L'Osservatore Romano, File)

ROME (AP) — Pope Francis met privately Thursday with a Sudanese woman who refused to recant her Christian faith in the face of a death sentence, blessing the woman as she cradled her infant daughter born just weeks ago in prison.

The Vatican characterized the visit with Meriam Ibrahim, 27, her husband and their two small children as "very affectionate."

The 30-minute encounter took place just hours after the family landed at Rome's Ciampino airport, accompanied by an Italian diplomat who helped negotiate her release, and welcomed by Italy's premier, who hailed it as a "day of celebration."

Vatican spokesman the Rev. Federico Lombardi said the pope "thanked her for her faith and courage, and she thanked him for his prayer and solidarity." Francis frequently calls attention to the suffering of those persecuted for their religious beliefs.

Lombardi said the presence of "their wonderful small children" added to the affectionate tone of the meeting. Video footage released by the Vatican shows the pope giving the family papal medals and rosaries. 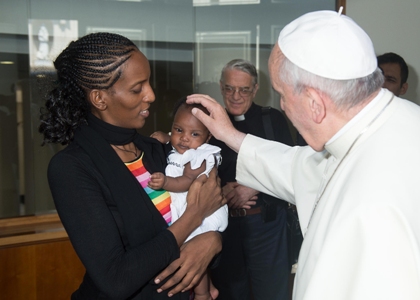 Ibrahim held her sleeping infant as she stepped off the plane from Sudan, which had initially blocked her from leaving the country even after the country's highest court overturned her death sentence in June. An Italian diplomat carried her 18-month-old son, while her husband, Daniel Wani, who is disabled, joined them on the tarmac in a wheelchairm.

Ibrahim and her family are expected to spend a few days in Rome before heading to the United States, where her husband is a citizen.

Ibrahim, whose father was Muslim but whose mother was an Orthodox Christian from Ethiopia, was sentenced to death over charges of apostasy. She married Wani, a Christian from southern Sudan, in a church ceremony in 2011. As in many Muslim nations, Muslim women in Sudan are prohibited from marrying non-Muslims, though Muslim men can marry outside their faith.

The sentence, issued in May, was condemned by the United States, the United Nations and Amnesty International, among others, and both the United States and Italy — a strong death penalty opponent with long ties to the Horn of Africa region — worked to win her release.

Sudan's high court threw out her death sentence in June, but she was then blocked from leaving the country by authorities who questioned the validity of her travel documents.

Lapo Pistelli, an Italian diplomat who accompanied the family from Sudan, said Italy was able to leverage its ties within the region. "We had the patience to speak to everyone in a friendly way. This paid off in the end," he said.