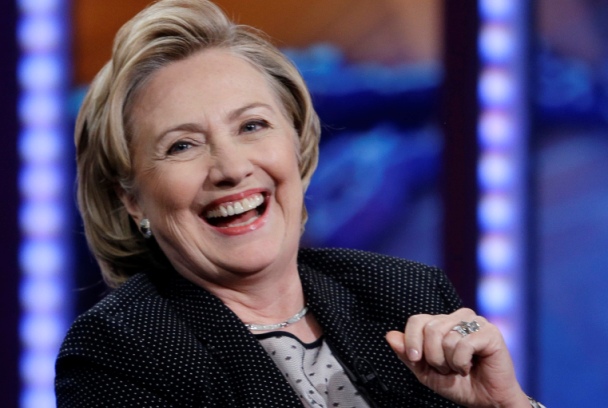 PHOTO: In this July 15, 2014, photo, former U.S. Secretary of State Hillary Rodham Clinton reacts to host Jon Stewart during a taping of "The Daily Show with Jon Stewart," in New York. As Clinton promotes her book, liberals in the Democratic party are elbowing into the 2016 presidential conversation while pitching populist messages on the economy and immigration. (AP Photo/Frank Franklin II)

WASHINGTON (AP) — As Hillary Rodham Clinton promotes her book, liberals in the Democratic Party are elbowing into the 2016 presidential conversation, pitching a populist message on the economy and immigration.

Potential Clinton rivals like Vice President Joe Biden, Massachusetts Sen. Elizabeth Warren and Maryland Gov. Martin O'Malley are in the middle of a summertime tour of Democratic constituencies and campaigns, drawing contrasts to Clinton as she weighs a heavily anticipated second presidential bid.

Biden and Warren were addressing Generation Progress, an organization of young Democratic activists, on Wednesday and speaking at the annual Netroots Nation conference later in the week, putting them before liberals who form a core of the Democratic base. O'Malley has been exploring a presidential campaign for months and made a splash last weekend when he said the Obama administration should not turn away Central American immigrant children crossing the border without due process.

Clinton, who dominates early 2016 polls, may avoid a significant primary challenge if she runs for president. Biden has kept all options open, Warren has repeatedly denied interest, while O'Malley promotes his record in Maryland as a model in the party. But the jousting shows an interest in an alternative, and preparations in the event Clinton doesn't run.

"Ongoing current events give her potential opponents an opportunity to position themselves in contrast to her," said Democratic strategist Tom McMahon.

Biden has been a leading advocate for President Barack Obama's agenda, backing unsuccessful efforts to raise the minimum wage and curb gun violence. The vice president has maintained ties to the early voting states of Iowa, New Hampshire and South Carolina and projects a blue-collar image in contrast to the former first lady's recent stumbles over discussions of her family's wealth.

During a White House summit on working families last month, Biden said he had been the "poorest man in Congress" and didn't own a single stock or bond — even though financial disclosures show he had a small savings account and owned mutual funds. Biden's remarks came as Clinton faced criticism for saying her family was "dead broke" when they left the White House in January 2001 because of hefty legal bills fending off GOP-led investigations. The Clintons paid off their debt and became multimillionaires within a few years.

Warren has become a hero of the party's economic populists, railing against high student loan debt at a time when Clinton has received six-figure speaking fees on college campuses. She passes them along to her family's foundation.

At a well-received speech to about 1,000 young people attending Generation Progress, Warren noted that her bill to help students refinance their college loans at lower rates had been blocked by Senate Republicans and she cast blame on Senate Republican leader Mitch McConnell, R-Ky.

"Our voices matter and it's time to use them. Together that's how we make sure that our government works," Warren said.

Warren has turned into a go-to surrogate for Senate candidates, campaigning for Democrats in Oregon, Kentucky and West Virginia. She planned to raise money for Rep. Gary Peters, who is seeking Michigan's open Senate seat, during her trip to Detroit for Netroots Nation and was ending the week in Los Angeles at the National Council of La Raza, where immigration will be a leading topic.

O'Malley has made trips to Iowa and New Hampshire in the past month and notably distanced himself from both Clinton and Obama on the crisis along the Mexican border.

"We are not a country that should turn children away and send them back to certain death," O'Malley told reporters in Nashville, Tennessee, during a weekend meeting of the National Governors Association.

Clinton cited the need to reunite the children with their families but said during a CNN forum in June that the U.S. needed to "send a clear message: Just because your child gets across the border doesn't mean your child gets to stay."

During her book tour, Clinton has frequently cited the economic struggles of many Americans who have yet to partake in the recovery and pointed to the broad-based growth in jobs during her husband's two terms in the White House. In an interview with German news magazine Der Spiegel, Clinton said the work of Thomas Piketty, the economist and best-selling author, showed that income inequality was "threatening to democracy."

That message could help her connect with liberals, who have been wary of her ties to Wall Street and the corporate support of the Clinton Foundation. Liberals are closely watching how Clinton might frame an economic agenda in a potential presidential campaign.

"She has to figure out what's her message for a new American electorate: African-Americans, Hispanics, young people, women, all of whom are suffering," said Roger Hickey, co-director of the Campaign for America's Future.