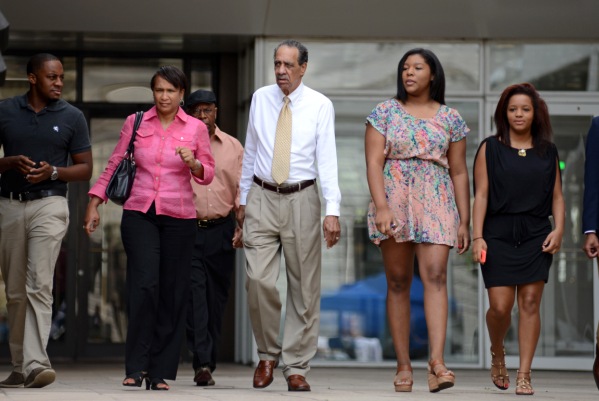 NEW ORLEANS (AP) — When Ray Nagin was elected mayor in 2002, there was real hope that he was a break from the city's sleazy past.

Three years later, with his city awash in foul water and rotting corpses, he became something of a national cult hero, raging against the slow, incompetent federal response to his crippled city's plight.

"Excuse my French — everybody in America — but I am pissed," he shouted during a radio appearance three days after Hurricane Katrina swamped the Crescent City.

In the end, though, Ray Nagin turned out to be a feckless mayor and, as a federal judge saw it, a lightweight criminal.

"He started out as a rock star and he ended up as just another crass, corrupt politician," said University of New Orleans Political Science Professor Ed Chervenak.

Nagin, a 58-year-old former cable television manager, was sentenced to 10 years in prison Wednesday for bribery, money laundering, fraud and tax violations stemming from his two terms as New Orleans' mayor from 2002-2010. To longtime civil rights attorney Mary Howell, who watched the Democrat with cautious optimism during his 2002 campaign, Nagin seemed to promise at least something new.

"I think people were really just kind of worn out by the same old, same old. And he really appeared on the horizon as something that was new and fresh," she said. "I think it would be fair to say, almost across the board, that for many people he was, his administration turned out to be a deep disappointment — and then a disaster. "

Prosecutors had been pushing for a sentence in the neighborhood of 20 years for Nagin, convicted in February of 20 criminal counts. The crimes, his repeated lies about them, the damage heaped on a city reeling from the catastrophe of Hurricane Katrina and a longtime reputation for corruption — all merited more prison time, prosecutors said at his Friday sentencing hearing.

U.S. District Judge Helen Berrigan acknowledged the seriousness, including the betrayal of a city at a time when it most needed a strong and honest leader.

But she also cast Nagin as something less than a kingpin. She noted that some of the businessmen involved in bribing him won millions of dollars in city business. Nagin is believed to have cleared only about a half million — in money, free trips, granite for a foundering family business — over his eight years.

"Mr. Nagin was not the organizer or leader of the group," Berrigan said. At times, she said, the crimes appeared to be motivated by a desire to impress and provide for his loved ones, something "less than ordinary greed."

And she said there were times when Nagin demonstrated "a genuine if all too infrequent" desire to help a city knocked on its heels after Katrina's levee breaches and catastrophic flooding.

At no time was his passion more clear than during that rambling, profane and angry tirade on WWL radio the night of Sept. 1, 2005, when he lashed out at the federal government for a slow response to the desperate city.

It was a different Ray Nagin than the one who emerged as an unexpected contender to succeed term-limited Marc Morial in 2002: the affable, handsome cable TV executive with the shaved head and easy smile who promised to crack down on corruption.

"There was a, I wouldn't say, hipness," said Howell. "But he had a sense of humor, and he had a kind of gift in certain ways."

Soon after he took office, Nagin announced a crackdown on corruption in the city's automobile inspection and taxi regulation agencies. But there was little to distinguish his first term until Katrina hit. He won re-election months after the storm — this time on the strength of his appeal to black voters fearful of being muscled out of the city's slow recovery. But his decline had begun and there was no end to it.

"He would make announcements about some project, but never really follow through," Chervenak remembered. "And then he was re-elected after Katrina, and then basically became disengaged and abandoned his responsibilities."

And then there was the corruption. Prosecutors say he had taken his first bribe even before Katrina and the pace picked up during his second term when millions in city-controlled recovery work was available.

"He was stealing," said Keith Harris of suburban Gretna, repairing a sidewalk near the courthouse. "After Katrina when people were looting, he sent them to jail. He was looting. He should have been in there too. ... He got some of my money. He got some of your money too."

Jay Nickle, at the front desk in an office tower near the courthouse, saw it differently. "We all make mistakes," she said. "He's going to learn from his."

Prosecutors objected to the sentence but said a decision on whether to appeal will be made later by the Solicitor General in Washington.

From the bench, Berrigan noted that, at 58, Nagin is unlikely to return to public life — or a life of crime. She recommended that he serve his sentence at a federal facility in Oakdale, La., and assigned a Sept. 8 reporting date.

Meanwhile, the city appears to have lost its taste for unknown reformers. Mitch Landrieu, a lifelong politician and son of a former mayor, succeeded the term-limited Nagin, winning landslides in 2010 and again this year.

"Today marks the end of a sad chapter for our city," Landrieu said in a news release after Nagin's sentencing. "The people of New Orleans are turning the page and moving forward."