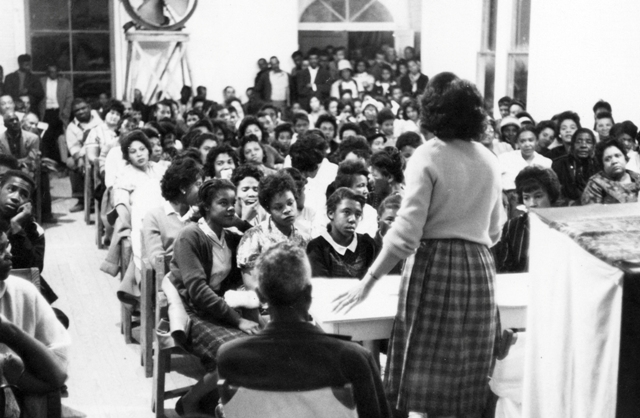 In this 1964 photo provided by Larry Rubin, people participate in "Freedom Summer" activities. During the freedom summer hundreds of volunteers, mostly Northern white college students and others, descended on the state to focus national attention on the indignities and horrors of segregation. (AP Photo/SNCC Legacy Project)

HOLLY SPRINGS, Miss. (AP) — As a teenager growing up in a Jim Crow society, Roy DeBerry wasn't waiting for white folks to come down to Mississippi and "save" him. But in the summer of 1964, the factory worker's son was very glad to see people like Aviva Futorian.

The young history teacher from the affluent Chicago suburbs was among hundreds of volunteers — mostly Northern white college students — who descended on Mississippi during what came to be known as "Freedom Summer." They came to register blacks to vote, and to establish "Freedom Schools" and community centers to help prepare those long disenfranchised for participation in what they hoped would be a new political order.

Opposition was brutal. Churches were bombed, volunteers were arrested, beaten — even murdered.

"There was real terror in Mississippi," DeBerry said during a recent visit to his hometown, Holly Springs.

Fifty years later, Freedom Summer stands out as a watershed moment in the long drive for civil rights. Mass resistance to integration started to crumble. Congress took a monumental step toward equal rights. And scores of young, idealistic volunteers embarked on careers of activism that continue to shape American politics and policy today.

And in this vortex of history, lifelong friendships formed between people from vastly different worlds.

So it was that a black 16-year-old from Mississippi and the 26-year-old daughter of a Jewish furniture mogul bonded over books and bologna sandwiches during a summer that would define their lives.

Sitting side by side recently in Futorian's condominium overlooking Chicago's Lincoln Park, the two friends reminisced about lessons under a tree, practice sessions for a sit-in at a segregated theater, taboos that prevented a white woman and black man from sitting next to each other in a car.

"I probably didn't have as much trepidation as I should have," said Futorian, now a 76-year-old attorney. "Because it's hard to imagine your own death."

Years of demonstrations by determined local blacks, boycotts, legislative campaigns and bloody pitched battles had not dislodged segregation. On March 20, the Student Nonviolent Coordinating Committee, which had been fighting for integration, announced the "Mississippi Summer Project." The group concluded it needed a dramatic tactic to draw national attention to the injustices — and putting Northern whites in harm's way seemed sure to accomplish that.

Volunteers converged for training at a college in Ohio. On June 21, even before orientation ended, chilling word spread: Three young volunteers — New Yorkers Andrew Goodman and Michael Schwerner, and Mississippi native James Chaney — had vanished while investigating the burning of a black church.

En route to Mississippi, the menace quickly became clear to Futorian. Following a gasoline stop in Tennessee, her car and its mixed-race passengers were chased for miles at high speeds. Finally, their pursuers gave up.

Maybe it was because his grandparents had been landowners since just after slavery days, or because his father wasn't dependent on sharecropping a white man's land. Whatever the source, DeBerry had "an independent streak."

He sensed the injustice of having to climb to the gallery at the segregated Holly Theatre. He resented having to call the white kid behind the counter at Tyson's Drug Store "sir."

"No one needed to teach you that," the 66-year-old DeBerry said. "It was just something that was in your DNA."

So when a Freedom School opened in an unassuming white-frame building, DeBerry found his way there.

When Futorian — who'd teach at two Freedom Schools that summer — met with a group of black teenage boys, she asked them who were the richest blacks in town, how they earned their living, were they involved in the civil rights movement and if not, why not?

"Roy was the only one who knew the answers," she recalls.

DeBerry says this was his first interaction with a white person "on a social level."

Through donated books, Futorian introduced him to James Baldwin, Ralph Ellison, Richard Wright and other "subversive" black authors. They shared sandwiches at Modena's Cafe in the "colored" section of town. They worked on voter registration — though separately.

They were well aware of the risks they were taking even before Aug. 4, when searchers dug the bodies of the three missing civil rights workers from an earthen dam.

Freedom Summer was lurching toward a bitter close.

By fall, most of the Northern volunteers had returned home. Aviva Futorian remained.

She worked as a field organizer for SNCC and held a college preparatory study group for a few particularly promising students, including DeBerry.

She returned to Chicago after a year and a half, and decided to pursue justice as a lawyer.

With her help, DeBerry was accepted at her alma mater, Brandeis University. He helped found a black student association there.

That summer brought the beginnings of change in Mississippi and beyond. Systematic resistance to integration began fading in the state. Congress passed the 1964 Civil Rights Act, which became law July 2.

And though fewer than one-tenth of the 17,000 black residents who attempted to register succeeded, the effort helped create momentum for the Voting Rights Act of 1965.

Some believe this activism planted the seeds for history-making events generations later. "If it hadn't been for the veterans of Freedom Summer, there would be no Barack Obama," longtime Georgia congressman John Lewis, then a coordinator for SNCC, wrote in a memoir.

She says a refusal by some to recognize past inequities is partly to blame for today's social ills. Now an attorney in Seattle, she's dismayed at recent developments — a Supreme Court decision that nullified portions of the Voting Rights Act, voter identification laws, "stand-your-ground" laws. The country, she says, is "moving backward."

Back in Chicago, Futorian and DeBerry chat about that sweltering season 50 years ago — and the legacy they share.

If not for Freedom Summer, DeBerry says he probably would have left Mississippi permanently. Instead, he returned and worked in higher education and government.

Mississippi led Futorian to a legal career, focusing in recent decades on death row inmates and a successful campaign to abolish capital punishment in Illinois.

Following a 1995 SNCC reunion in Holly Springs, the former teacher and student began collecting oral histories of those who'd lived under Jim Crow in two Mississippi counties. In 2004, they formally launched the Hill Country Project, which has since grown to include education support and economic development.

Through all the change over the last five decades, there has been one constant for DeBerry and Futorian — their friendship.