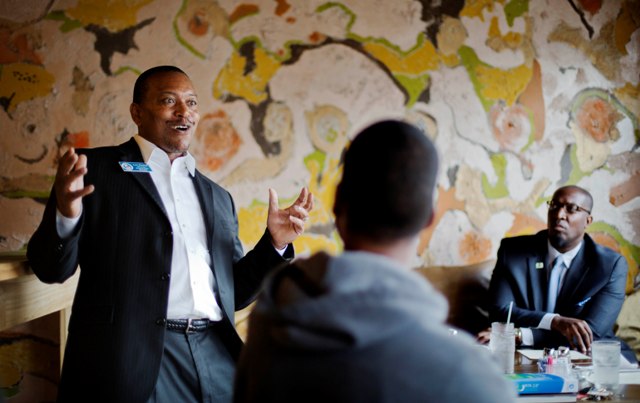 In this May 18, 2014, photo, Leo Smith, left, minority engagement director for the Georgia Republican Party, talks with members of the community at the Delightful Eatz Bar and Grill in the historically African-American neighborhood of Edgewood in Atlanta. Smith is on the GOP's front lines recruiting African-American voters in pivotal states. It’s a priority for a heavily white party staring with uncertainty at a country that is fast becoming brown. (AP Photo/David Goldman)

SMYRNA, Ga. (AP) — Like an eager date, Leo Smith showed up at Mount Zion First Baptist Church with a bouquet of flowers in hand.

He wasn't seeking romance. He was seeking voters.

As the minority engagement director for the Georgia Republican Party, Smith is helping to lead an effort to recruit African-American voters in pivotal states, a priority for a heavily white party staring with uncertainty at a country that is fast becoming more black, Hispanic and Asian.

Smith and other black Republicans who are recruiting voters say there are plenty of black conservatives out there. They just don't want to be identified publicly as conservative or Republican.

"We're missing some people because they're whispering, and to have people speak out loud is what we intend to do," Smith said.

Few of those votes went to Republican candidates; most African-American voters do not identify themselves as Republican. Exit polls conducted for The Associated Press and the networks showed that only about 6 percent identified themselves as GOP voters in 2004, and 4 percent did so in 2008 and 2012.

Once the party of choice for blacks after slavery ended more than a century ago, the GOP says it now wants those votes back. It is spending $60 million to court black voters, and a new initiative aims to recruit 300 women and 200 minorities to run for state and local office.

The party is starting up College Republican chapters at historically black schools such as Morehouse College in Atlanta and Central State University in Wilberforce, Ohio. And on Friday, Koch Industries Inc. and the Charles Koch Foundation — run by the billionaire Koch brothers, patrons of libertarian and conservative causes — announced a $25 million grant to the United Negro College Fund, which offers financial aid to students at black colleges and universities.

In a meeting last month with African-American journalists, Rep. Paul Ryan of Wisconsin, the GOP vice presidential nominee in 2012, acknowledged the GOP faces difficulties in wooing blacks but said black voters may find some of the party's ideas appealing, if they give the GOP a fair hearing.

"And we're learning, we're stumbling," Ryan said. "I'm going to be clumsy on this; I already have been, and I'm going to be, because we're trying to break barriers that have existed for many years."

Black voters turned Democratic and pretty much stayed that way after Democratic Presidents Harry Truman and Lyndon Johnson integrated the military and the federal government, dismantled state-sanctioned segregation and reinforced blacks' voting rights. Many Southern whites then left the Democratic Party, and with their departure came racial rhetoric that created a chasm between the GOP and African-American voters, said Fredrick C. Harris, professor of political science at Columbia University.

Republicans started "playing on the politics of race and racism in order to curry favor on the right, and African Americans saw this and voted in their interests," Harris said.

Smith, a former NAACP leader in Virginia, met up with several potential voters at Delightful Eatz, a downtown Atlanta restaurant near the Martin Luther King National Historical Site. They discussed the GOP's pro-business message, and Smith encouraged one job-seeker who designs online courses to open her own consulting business rather than looking for employment at a company.

"We have to think about something bigger," Smith said.

Some black voters who normally vote Democratic may be willing to consider voting Republican.

But it's going to be an uphill climb.

Black Republicans cringe when they hear vitriol from conservatives directed at President Barack Obama, or negative comments about black people coming from extremists. The challenge is to assure blacks who may lean conservative that they can publicly identify with the GOP without hurting their standing in the black community.

"Until they can rid themselves of the factions such as the tea party, it's going to be extremely difficult to combat that kind of rhetoric to the extent that they will be able to attract African Americans to the party," said D'Andra Orey, a political science professor at Jackson State University in Jackson, Mississippi.

In turn, Republicans will have to do a better job on the ground of talking to minority voters, Ryan said.

"We have to get out and do this in our communities, and not enough Republicans are doing that," he said.

Back at Mount Zion, Smith stood and waved to the largely female crowd as the pastor, Rev. John C. Hearst, acknowledged the bouquet that Smith brought. Smith had hoped that some of Georgia's GOP candidates would join him at the church to meet voters.

Hearst, 84, made clear that he wasn't a Republican but said he was open to letting any candidate come to speak to his flock.

"How do I know what the Republicans are doing unless I associate with them?" Hearst said. "... I guess I'm classified as a Democrat, but if a Republican is doing a better job, I can go along with that."