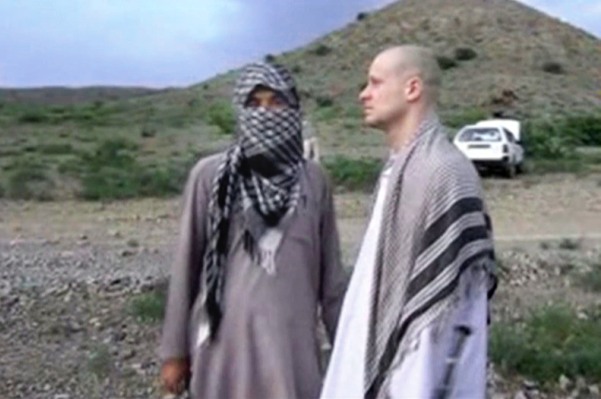 In this image taken from video obtained from Voice Of Jihad Website, which has been authenticated based on its contents and other AP reporting, Sgt. Bowe Bergdahl, right, stands with a Taliban fighter in eastern Afghanistan. The Taliban on Wednesday, June 4, 2014, released a video showing the handover of Bergdahl to U.S. forces in eastern Afghanistan, touting the swap of the American soldier for five Taliban detainees from Guantanamo as a significant achievement for the insurgents. Bergdahl was freed on Saturday after five years in captivity, and exchanged for the five Guantanamo detainees who were flown to Qatar, a tiny Gulf Arab country which has served as a mediator in the negotiations for the swap. (AP Photo/Voice Of Jihad Website via AP video)

KABUL, Afghanistan (AP) — The Taliban released a video Wednesday showing Sgt. Bowe Bergdahl being handed over to U.S. forces and bundled into a helicopter in eastern Afghanistan, touting the swap of the abducted American soldier for five Taliban detainees from Guantanamo as a significant achievement for the insurgents.

The exchange and still-murky circumstances of how Bergdahl came to be captured by the Taliban nearly five years ago have prompted a fierce debate in Washington after the five freed Taliban were flown to Qatar, a tiny Gulf Arab country that served as a mediator between the two sides.

U.S. Defense Secretary Chuck Hagel said Wednesday it is unfair to the family of released captive Sgt. Bowe Bergdahl to leap to conclusions about his behavior in uniform.

"We don't do that in the United States," Hagel told reporters at a NATO defense ministers meeting. "We rely on facts."

Hagel said the Army will review the circumstances surrounding how Bergdahl left his unit and was captured by the Taliban, and added, "It's not my place as a former sergeant in the Army to decide who's worthy of being a sergeant and who isn't."

Bergdahl was released Saturday from five years' captivity by the Taliban in exchange for five top Taliban officials.

Asked whether men had died in the efforts to rescue Bergdahl, Hagel said, "I don't know of any circumstances or details of U.S. soldiers dying as a result of efforts to get Bergdahl."

Men in Bergdahl's unit have said that some did die in the efforts, even if indirectly.

The 17-minute video, which was emailed to media organizations, shows Bergdahl in traditional Afghan clothing, the white shalwar kameez, clean-shaven and sitting in a white pickup truck. More than a dozen Taliban fighters with machine guns, their faces mostly covered by headscarves, stand around the truck and on a rocky desert hillside overlooking the site.

Bergdahl blinks frequently as he looks out of the truck and appears to be listening as one of his captors speaks to him. At one point, he wipes his left upper eyelid as if to get rid of some dust.

Since his release, the 28-year-old from Hailey, Idaho, was reported to be in stable condition at a military hospital in Germany.

A Black Hawk helicopter then lands and two Taliban fighters, one carrying a white piece of cloth tied to a stick of wood, lead Bergdahl, now wearing a gray shawl around his shoulders, half way toward the helicopter, a few hundred meters (yards) away.

Bergdahl is then greeted and taken by three Western-looking men in civilian clothes to the helicopter, where soldiers in Army uniforms are waiting. Before he climbs in, one of the three men pats down Bergdahl in a quick search, possibly looking for explosives, then soldiers help him board the helicopter.

According to a voiceover in the video, (http://apne.ws/1kKknrJ), the handover took place around 4 p.m. on Saturday in the area of Bati in Ali Sher district of eastern Khost province, near the Pakistani border. As the helicopter approaches, one of the Taliban men gets closer to Bergdahl and is heard speaking in Pashto, one of the two main Afghan languages.

"Don't come back to Afghanistan," the man tells Bergdahl. "You won't make it out alive next time," he adds as some of the others are heard laughing. The same words appear over the video in English, with misspellings.

Just before the helicopter lands, some of the Taliban near the pickup shout: "Long life to Mujahedeen," or holy warriors as the Taliban call themselves.

A Taliban statement, also distributed to media, quoted their leader Mullah Mohammad Omar as describing the release of the five Taliban officials from Guantanamo as a significant achievement for the movement. The Taliban had announced the exchange with "great happiness and joy" and said they were seeking the release of additional prisoners, though they provided no specifics.

U.S. Defense Department press secretary Rear Adm. John Kirby said the Pentagon was reviewing the video even though it had no reason to doubt its authenticity.

"Regardless, we know the transfer was peaceful and successful, and our focus remains on getting Sgt.Bergdahl the care he needs," Kirby said Wednesday.

The release of the five Taliban was conditioned on assurances from officials in Qatar, where they will have to stay for one year, that they will track them and allow the U.S. to monitor them. The five were among the most senior Afghans still held at Guantanamo.

But even as Bergdahl's hometown celebrates his release, the Army is contemplating pursuing an investigation that could lead to desertion or other charges against him.

The Pentagon concluded in 2010 that Bergdahl had walked away from his unit before he was captured by the Taliban. Members of Bergdahl's unit and military officials have complained that his decision to leave his base unarmed put his fellow soldiers in danger and that some were killed in missions that included looking for him.

The Afghan Foreign Ministry has criticized the swap, saying it was "against the norms of international law" if it came against the five imprisoned Taliban detainees' will. It also criticized the restrictions put on the five Taliban officials freedom of movement in Qatar.