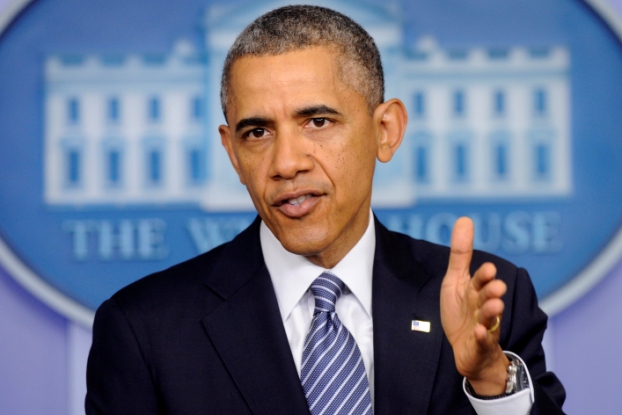 President Barack Obama makes a statement in the Brady Press Briefing Room of the White House in Washington, Friday, May 30, 2014, following his meeting with Veterans Affairs Secretary Shinseki. The president said that Shinseki is resigning amid widespread troubles with veterans' health care. (AP Photo/Susan Walsh)

Obama said he accepted the retired four-star general's resignation "with considerable regret" during an Oval Office meeting. Shinseki had been facing mounting calls to step down from lawmakers in both parties since a scathing internal report out Wednesday found broad and deep-seated problems in the sprawling health care system, which provides medical care to about 6.5 million veterans annually.

Obama said Shinseki had served with honor, but the secretary told him the agency needs new leadership and he doesn't want to be a distraction. "I agree. We don't have time for distractions. We need to fix the problem," Obama said.

The president named Sloan D. Gibson, currently the deputy VA secretary, to run the department on an interim basis while he searches for another secretary. The president said he met with Gibson after accepting the resignation from Shinseki, who has overseen the VA since the start of Obama's presidency.

A career banker, Gibson has held the No. 2 post at the department since February of this year. He came to the department after serving as president and chief executive officer of the USO, a nonprofit organization that provides programs and services to U.S. troops and their families, and after a 20-year career in banking.

Gibson is the son of an Army Air Corpsman who served in World War II and grandson of a World War I Army Infantryman.

Obama said an audit submitted by Shinseki shows that the problems are not limited to a few facilities but to many across the country. "It is totally unacceptable," Obama said. "Our vets deserve the best; they've earned it."

Obama said Shinseki had begun the process of firing people and had canceled performance bonuses. The president said it would be up to the Justice Department to determine whether there was any criminal wrongdoing at the VA.

In a speech earlier Friday to a veterans group, Shinseki said the problems outlined in the report were "totally unacceptable" and a "breach of trust" that he found indefensible. He announced he would take a series of steps to respond, including ousting senior officials at the troubled Phoenix health care facility, the initial focus of the investigation.

He concurred with the report's conclusion that the problems extended throughout the VA's 1,700 health care facilities nationwide, and said that "I was too trusting of some" in the VA system.

The VA has a goal of trying to give patients an appointment within 14 days of when they first seek care. Treatment delays — and irregularities in recording patient waiting times — have been documented in numerous reports from government and outside organizations for years and have been well-known to VA officials, member of Congress and veteran service organizations.

But the controversy now swirling around the VA stems from allegations that employees were keeping a secret waiting list at the Phoenix hospital — and that up to 40 patients may have died while awaiting care. A preliminary VA inspector general probe into the allegations found systemic falsification of appointment records at Phoenix and other locations but has not made a determination on whether any deaths are related to the delays.

The agency has been struggling to keep up with a huge demand for its services — some 9 million enrolled now compared to 8 million in 2008. The influx comes from returning Iraq and Afghanistan veterans, aging Vietnam War vets who now have more health problems, a move by Congress to expand the number of those eligible for care and the migration of veterans to the VA during the last recession after they lost their jobs or switched to the VA when their private insurance became more expensive.

Shinseki said the last several weeks have been "challenging" but that his agency takes caring for veterans seriously.

"I can't explain the lack of integrity," he told a homeless veterans group. "I will not defend it, because it is not defensible." The beleaguered Cabinet official received a standing ovation and loud applause.

An inspector general's report found that about 1,700 veterans in need of care were "at risk of being lost or forgotten" after being kept off an official waiting list.

The report confirmed earlier allegations of excessive waiting times for care in Phoenix, with an average 115-day wait for a first appointment for those on the waiting list — nearly five times as long as the 24-day average the hospital had reported.

"This situation can be fixed," Shinseki told an audience of several hundred people from around the nation who have been working with the VA on helping homeless veterans. "Leadership and integrity problems can and must be fixed — and now."

He said the government would not give any performance bonuses this year, would use all authorities it has against those "who instigated or tolerated" the falsification of wait time records and that performance on achieving wait time targets will no longer be considered in employee job reviews. He also asked Congress to support a bill by Rep. Bernie Sanders, I-Vt., which would give the department more authority to remove senior government employees who are in leadership positions.

The House has passed a similar bill that would give the VA more ability to fire up to 450 senior executives at the agency.

Even as he said he agreed it was best for Shinseki to go, Obama sought to shield the outgoing secretary from being labeled a failure or accused of doing wrong by veterans. He credited Shinseki with reducing veteran homelessness, improving care for women and making progress on veterans' education and mental health treatment.

"I want to reiterate, he is a very good man," Obama said. "He's a good person who's done exemplary work on our behalf."