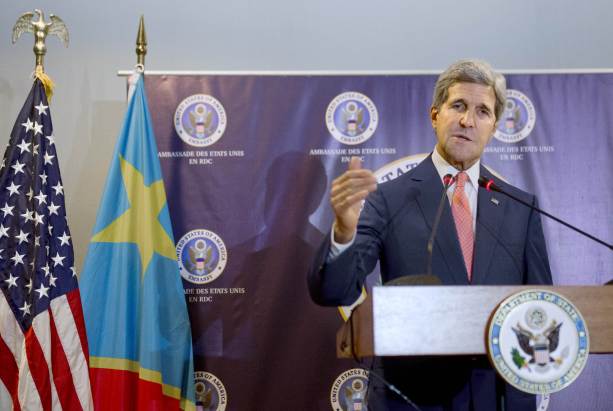 U.S Secretary of State John Kerry gives a press conference after meetings at the Palais de la Nation in Kinshasa, Democratic Republic of Congo, Sunday, May 4, 2014. The United States is ready to help fund the demobilisation of Democratic Republic of Congo's rebels, a senior US official said on May 3 as Secretary of State John Kerry arrived in the country on the latest leg of an Africa tour. "I can say categorically that we're ready to support them," the official said when asked if Washington was ready to back the government's demobilisation plan for some 12,000 rebels active in dozens of militias in the country's mineral-rich, restive east, a plan that's estimated to cost some 100 million dollars. (AP Photo/Saul Loeb, pool)

WASHINGTON (AP) — Secretary of State John Kerry said Wednesday the United States is setting up a $5 billion “terrorism partnership fund” to help other countries push back against radical extremists.

Appearing on a host of network morning-show interviews, Kerry staunchly defended President Barack Obama's decision to terminate the U.S. combat role in Afghanistan by the end of the year.

Referring in an NBC “Today” show interview to a speech Obama was set to give later Wednesday at the U.S. Military Academy,Kerry said Obama is telling the Afghans “by a specific time they have to take over management of their own security and military.”

The secretary said the message to Afghanistan is “we're not going to give you all the time in the world. You have to push the envelope.”

Appearing on “CBS This Morning,” he said the withdrawal plan of the U.S. will allow this country to divert resources to the anti-terrorism fight in other parts of the world. Kerry said U.S. foreign policy needs to reflect a “rapidly changing, more complex world where terrorism is the principal challenge.”

Kerry called the Afghanistan troop withdrawal announcement “a statement of transition” and said that “if you tell the Afghans we'll be here as long as it takes, you can absolutely bet your bottom dollar they'll take as long as they want.” The secretary also said “it is exactly what the American people have always sought in Afghanistan” and said “the Afghans want us to transition out.”

During his interview on ABC's “Good Morning America,” Kerry was asked for an update on U.S. efforts to win the release of nearly 300 schoolgirls abducted by Islamic extremists in Nigeria. “We have people on th e ground and we're working hand in hand with Nigerians,” he replied.