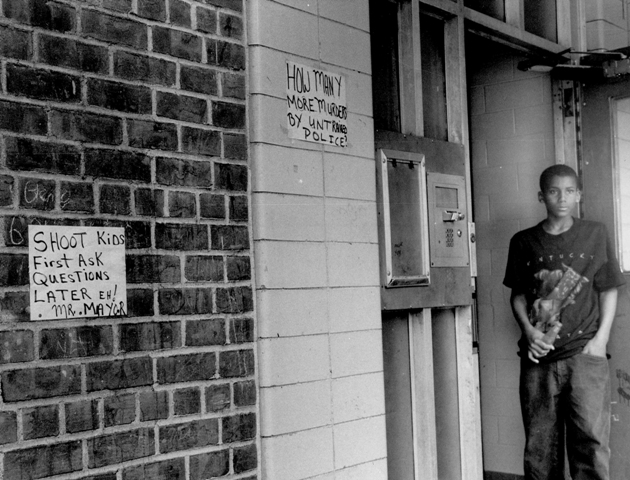 In this Sept. 28, 1994 photo, Ronald Herron, 12, stands in the doorway of the Gowanus Houses in New York. Now 32 and sometimes known as the Rapper “Ra Diggs,” Herron is accused by prosecutors as the ruthless leader of a violent drug gang, and faces a federal murder trial in New York. The government and defense are locked in a debate whether Herron’s music and videos are evidence of real crimes committed by one of the city's highest ranking Bloods or are constitutionally protected, and inadmissible, expressions of free speech that his lawyers have likened to Johnny Cash's "Folsom Prison Blues." (AP Photo/Steve Berman)

NEW YORK (AP) — When he wasn't busy being what prosecutors portray as the ruthless leader of a violent drug gang, Ronald Herron was moonlighting as a rapper known as Ra Diggs.

Herron's gritty body of work, including music videos with titles like "Live by the Gun, Die by the Gun," has become a point of contention as his murder case nears trial in federal court in Brooklyn. Jury selection began Tuesday.

In court papers, the government and the defense have debated whether the recordings are evidence of real crimes committed by one of the city's highest ranking Bloods or are constitutionally protected — and inadmissible — expressions of free speech that his lawyers have likened to Johnny Cash's "Folsom Prison Blues."

In one video, Herron brags about wearing body armor, saying, "I'm gripped up, I'm vest upped ... I'm ready for war man, on all fronts." Both sides are awaiting a ruling on whether the government can show jurors portions of that recording and 12 others gathered during the investigation of a narcotics dealing enterprise.

It's a legal question that isn't isolated to Herron's case.

In another case ending in a conviction last year, a Manhattan judge allowed prosecutors to show amateur rap video starring a defendant charged in a string of armed robberies, agreeing that it was evidence he had access to guns. The video, inspired by "The Joy" by Kanye West and Jay-Z, showed the defendant driving the getaway car in a staged hold-up.

Earlier this month, New Jersey's Supreme Court heard arguments about whether the trial judge in a drug-related shooting case should have barred prosecutors from reading 13 pages of the lyrics to jurors, including one in which the defendant boasted about "four slugs drillin' your cheek to blow your face off," that were written before the crime.

In the Herron case, prosecutors allege he lived his lyrics in a criminal career that began with his arrest as a teenager on robbery and weapons charges. By the late 1990s, he rose to a leadership role in a Bloods faction called the Murderous Mad Dogs that sold crack cocaine out of a housing project in his Brooklyn neighborhood, they say.

In 2001, Herron was charged in a fatal shooting. He was acquitted of murder but convicted of drug possession and sent to prison until 2007, when he went back to his neighborhood, reclaimed his turf and resumed killing rivals, prosecutors say.

One of the killings was payback for the 2009 shooting of one of Herron's top lieutenants, nicknamed Moose, authorities said. Herron chased the shooter into the courtyard of a housing project and pumped several bullets into him, they said.

A video from a documentary-style series titled "Ra Diggs TV" shows the wounded Moose recovering in a hospital bed and talking to Herron about the fate of the man who shot him. Herron is heard saying, "See you soon at a cemetery near you, man."

The defense has argued that the videos are fictional works of art expressing the 32-year-old Herron's views on the hardships of inner-city life. They cited studies in academic journals that have concluded rap lyrics, when allowed as evidence, often are misinterpreted to the point of prejudicing juries.

Among the Ra Diggs rhymes cited by defense papers: "I ain't working no slave at no age ... And it's like in this day and age, if I ain't get paid, then the hammer's getting cocked and something's getting spray."

Comparing the videos to Johnny Cash singing in "Folsom Prison Blues" that he "shot a man in Reno just to watch him die," the lawyers argued that their client's recordings "cannot be fairly construed to mean the words express admissions of personal conduct, acts or even the author's true beliefs."

The government has countered by saying that Herron "built a drug-dealing enterprise through ruthless violence and intimidation, terrorizing a community in the process, then wrote about it, highlighting his real-life criminal conduct to burnish his credentials as a real-life gangster." Making those admissions rhyme and putting them to music "does not inoculate him against their use against him a trial."

The jurors will not be hearing a performance by Herron of a different sort: U.S. District Judge Nicholas Garaufis rejected his request this week to give his own opening statement.