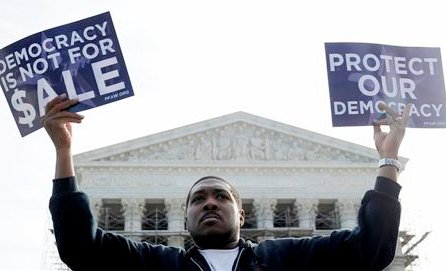 This Oct. 8, 2013 file photo shows Cornell Woolridge of Windsor Mill, Md., takes part in a demonstration outside the Supreme Court in Washington as the court heard arguments on campaign finance. The Supreme Court struck down limits Wednesday in federal law on the overall campaign contributions the biggest individual donors may make to candidates, political parties and political action committees. The justices said in a 5-4 vote that Americans have a right to give the legal maximum to candidates for Congress and president, as well as to parties and PACs, without worrying that they will violate the law when they bump up against a limit on all contributions, set at $123,200 for 2013 and 2014. That includes a separate $48,600 cap on contributions to candidates. (AP Photo/Susan Walsh, File)

MILWAUKEE (AP) — A federal judge struck down Wisconsin's voter identification law Tuesday, declaring that a requirement that voters show a state-issued photo ID at the polls imposes an unfair burden on poor and minority voters.
U.S. District Judge Lynn Adelman sided with opponents of the law, who argued that low-income and minorityvoters aren't as likely to have photo IDs or the documents needed to get them. Adelman said the law violated the U.S. Constitution's guarantee of equal protection. He also said the law appeared too flawed to fix with legislative amendments.
Adelman's decision invalidates Wisconsin's law and means voter ID likely won't be in place for the fall elections, when Republican Gov. Scott Walker faces re-election. While Walker committed last month to calling a special legislative session if the law were struck down in court, his spokeswoman wouldn't commit to that Tuesday.
"We believe the voter ID law is constitutional and will ultimately be upheld," Walker spokeswoman Laurel Patrick said in an email. "We're reviewing the decision for any potential action."
The ruling could set a precedent for similar legal challenges in Texas, North Carolina and elsewhere. There are 31 states with laws in effect requiring voters to show some form of identification, according to the National Conference of State Legislatures. Seven states have strict photo ID requirements similar to the one a state judge struck down in Arkansas last week; that decision has been appealed to the Arkansas Supreme Court. Pennsylvania's voter ID law has been put on hold because of court challenges.
Earlier this month, President Barack Obama waded into the voter ID debate, accusing Republicans of using restrictions to keep voters from the polls and jeopardizing 50 years of expanded voting access for millions of black Americans and other minorities.
A Dane County judge had already blocked Wisconsin's law in state court. The state Supreme Court heard arguments in two separate lawsuits in February, although it's not clear when the justices will issue a ruling. Forvoter ID to be reinstated, the state's high court would have to rule that it doesn't violate the state constitution, and Adelman's decision would have to be overturned on appeal.
Wisconsin's Department of Justice, which defended the state law in court, pledged to continue the fight.
"I am disappointed with the order and continue to believe Wisconsin's law is constitutional," Attorney General J.B. Van Hollen said in a statement. "We will appeal."
Republican backers had argued that requiring voters to show ID would cut down on voter fraud and boost public confidence in the integrity of the election process. But Adelman, who was appointed to the bench in 1997 by President Bill Clinton, said the state failed to prove that voter fraud is a legitimate problem.
"(V)irtually no voter impersonation occurs in Wisconsin," he wrote in a 90-page opinion, "and it is exceedingly unlikely that voter impersonation will become a problem in Wisconsin in the foreseeable future."
Wisconsin's Republican-led Legislature passed the photo ID requirement in 2011, scoring a long-sought GOP priority. Former Gov. Jim Doyle, a Democrat, had vetoed a similar requirement three times between 2002 and 2005.
Wisconsin's law was only in effect for a 2012 primary before a Dane County judge declared it unconstitutional.
Adelman pledged to expedite any proceedings should Wisconsin's Legislature attempt to amend the law, but he also had strong cautionary words for lawmakers.
"Given the evidence presented at trial showing that Blacks and Latinos are more likely than whites to lack anID, it is difficult to see how an amendment to the photo ID requirement could remove its disproportionate racial impact and discriminatory result," Adelman wrote.
Wisconsin residents can get a free state ID from a Department of Motor Vehicles by presenting documents such as a certified birth certificate, passport or Social Security card. Each document must be unexpired, and the person's name must be spelled identically on each document.
A number of witnesses testified the regulation was a problem, either because their names were misspelled on a key document or because they were born in rural areas during an era when birth certificates weren't always issued.
Adelman cited their testimony in his ruling, noting that they faced challenges that could deter them from voting.
"Although not every voter will face all of these obstacles, many voters will face some of them, particularly those who are low-income," the judge wrote.
The federal challenge combined two separate cases. One was brought by minority-rights groups, including the Wisconsin chapter of the League of United Latin American Citizens, and the other involved the American Civil Liberties Union and the Washington, D.C.-based Advancement Project.
ACLU spokesman Dale Ho said his group was "ecstatic" over the victory, and felt Adelman rendered a fair assessment of the evidence.
"We're pleased. We feel vindicated by the judge's decision," he said.