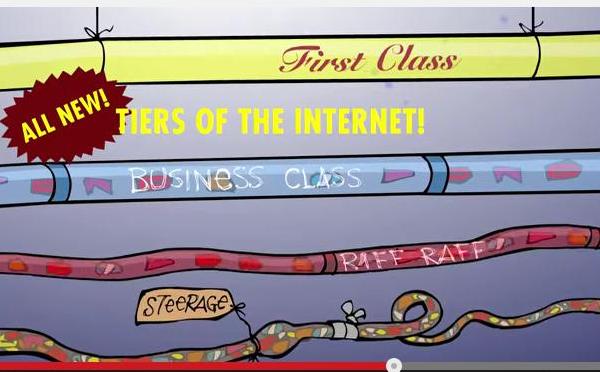 PHOTO: The image is from the animation by political cartoonist Mark Fiore giving his take on the dangers of the FCC proposal. See it below.

LOS ANGELES (AP) — The nation's top telecoms regulator is proposing to allow a pay-for-priority fast lane on the Internet for movies, music and other services to get to people's homes.

The proposed rules come after a federal appeals court struck down previous “net neutrality” rules designed to prevent Internet access providers such as Comcast from discriminating against certain traffic flowing to their customers.

Under the proposal, an access provider could demand that high-traffic services such as Netflix pay for preferential treatment. The proposal would include safeguards to make sure the arrangements don't harm consumers or stifle competition and free speech.

Because of that, FCC officials insist it's not a departure from past policy. However, it would now permit something the FCC had discouraged under the old rules.

Consumer advocates say the proposed system would inevitably allow deep-pocketed Internet giants like Netflix, Google and Facebook to maintain their edge over startups because they can pay to ensure snappier connections and clearer, uninterrupted video.

It could result in higher prices for consumers who pay for Netflix and similar online services, as the cost of speedier treatment could be passed on. It also could create a new revenue stream for Internet service providers like Comcast or Verizon.

The draft rules kick off a policymaking process that involves commissioner votes and a public comment period before a final vote sometime this summer.

Federal Communications Commission Chairman Tom Wheeler sought to dispel what he called “misinformation” about the proposed rules, which he presented to the agency's other four commissioners Thursday. They're not expected to be available publicly for a couple weeks.

In a blog post, he insisted the new rules are meant to achieve the same goal as the 2010 open Internet rules that the court struck down in January.

“To be very direct, the proposal would establish that behavior harmful to consumers or competition by limiting the openness of the Internet will not be permitted,” he said in a blog post Thursday. “The allegation that it will result in anti-competitive price increases for consumers is also unfounded.”

“A policy that encourages paid prioritization is not network neutrality, and the commission is using a bad legal path to a terrible policy end,” said Sarah J. Morris, senior policy counsel at New America, a non-partisan think tank.

Corynne McSherry, intellectual property director with the non-profit civil liberties group Electronic Frontier Foundation, said she's concerned the FCC's rules for governing priority traffic could be too vague and leave too much to the FCC's discretion.

“We need trust but verify,” she said. “I'm concerned we're going to create a new wave of legal uncertainty both for larger companies but also people trying to get into the game.”

The FCC proposal also takes the United States in a different direction from counterparts in Europe. Earlier this month, the European Parliament voted to stop Internet providers from charging for preferential access. The move was protested by European telecommunications companies and requires approval of EU leaders to become law, likely at a meeting in October.

In January, the U.S. Court of Appeals for the District of Columbia Circuit affirmed that the FCC had the authority to create open-access rules but said the agency failed to establish that its 2010 regulations didn't overreach. It was the second time a court had struck down such a rule since the FCC began adopting an open Internet policy in 2004.

While the older rules technically allowed for paid priority treatment, the practice was discouraged.

The new rules would require that such deals be “commercially reasonable.” If such a deal for priority access were challenged either by an outside party of the FCC itself, the commission would look at its impact on competition, on consumers, on free speech and on civic engagement. It would also try to determine whether a broadband provider was acting in good faith.

The commission will also ask for comment on how to make such dealings more transparent, but it didn't have a recommendation on the matter.

The new rules don't affect the exchange of traffic between long-haul networks that form the Internet's backbone. That means they won't have any bearing on Netflix's recent agreement to pay Comcast to improve the hand-off of traffic to its network. Netflix had called for the FCC to expand its definition of “net neutrality” rules to cover such connections and guarantee that they would be free of charge.

Internet access providers say they should be allowed to charge a content company when they have to deliver large amounts of data, such as video, to their broadband customers.

Netflix, which asked the FCC to expand “net neutrality” rules to cover the Internet backbone, came out against the FCC's proposal.

“The proposed approach is the fastest lane to punish consumers and Internet innovators,” the company said in a statement.

Verizon, a major high-speed broadband provider through its FiOS service, said it supports an open Internet and has committed to ensuring that customers can access whatever they want. “The FCC should be very cautious about adopting proscriptive rules that could be unnecessary and harmful,” Verizon spokesman Ed McFadden said in a statement.

Some people believe the FCC's proposed rules could benefit consumers in the long run.

“Allowing higher charges for faster speeds is consistent with a policy of attracting more investment to the most important network in America and improving broadband for all users,” said George Foote, a Dorsey & Whitney attorney who works on policy matters on behalf of utility companies.

The proposed rules would also restore a previous prohibition on Internet service providers from blocking access to websites. That is meant to help Internet startups succeed and foster the growth of the Internet economy. The commission is also seeking to establish the minimum standard of service and will ask the public to help determine that.

The FCC is not seeking to treat Internet providers as “common carriers” such as telephone companies, which would subject companies like Comcast and Verizon to even stricter rules, although it is keeping the option open.