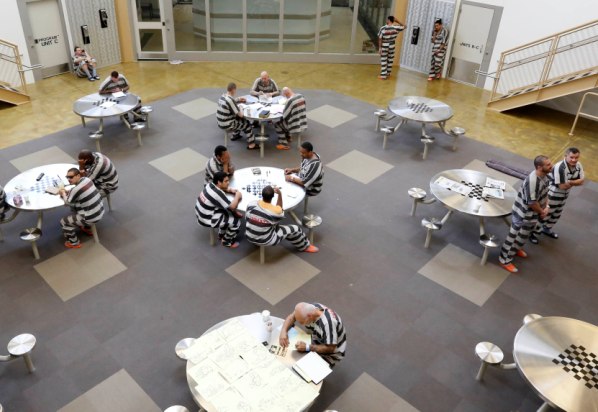 In this March 25, 2014, inmates gather in the common room at the new 192-bed facility at the Stanislaus County Jail in Modesto, Calif. Stanislaus is among the 10 counties that California Gov. Jerry Brown has visited since mid-January, touring jails meeting with inmates as well as with sheriffs, district attorneys, judges county supervisors police chiefs and probation officers to discuss the realignment law that took effect in October 2011. The message Brown received from his visits was that counties would need more money to build more jail cells and to provide inmate mental health counseling, and education and rehabilitation programs. (AP Photo/Rich Pedroncelli)

WASHINGTON (AP) — The Justice Department is encouraging nonviolent federal inmates who have behaved in prison, have no significant criminal history and have already served more than 10 years behind bars to apply for clemency, officials announced Wednesday.

The initiative is part of a broader Obama administration effort to trim the nation's prison population, ease sentencing disparities arising from drug possession crimes and scale back the use of strict punishments for drug offenders without a violent past. The goal is to create a larger pool of eligible prisoners the Justice Department can recommend to the president to consider for shorter sentences. 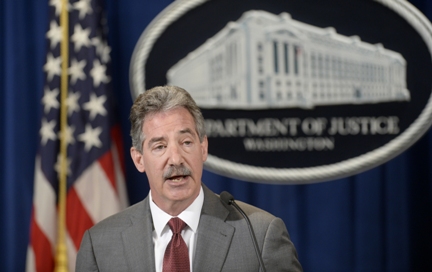 PHOTO: Deputy Attorney General James Cole speaks during a news conference at the Justice Department in Washington, Wednesday, April 23, 2014. Cole announced the new standards that will be considered in deciding whether to recommend clemency for certain non-violent drug prisoners. Wednesday's announcement is part of an ongoing effort to trim the nation’sprison population and help convicts who were given what the Obama administration says were unduly harsh sentences for drug crimes. (AP Photo/Susan Walsh)

Deputy Attorney General James Cole laid out half a dozen criteria for clemency that the government will consider in evaluating future inmate applications. The announcement is aimed primarily at drug prisoners, especially those sentenced under old guidelines that resulted in significantly harsher penalties for people caught with crack cocaine than for those who possessed the powder form of the drug. But it also applies to federal inmates imprisoned for other crimes, provided they meet the same criteria.

"These defendants were properly held accountable for their criminal conduct. However, some of them, simply because of the operation of sentencing laws on the books at the time, received substantial sentences that are disproportionate to what they would receive today," Cole said. "Even the sentencing judges in many of these cases expressed regret at the time at having to impose such harsh sentences."

To be eligible for consideration, inmates must be deemed nonviolent, low-level offenders with no gang ties, and must have spent at least 10 years behind bars and received a harsher punishment at the time of sentencing than they would have gotten for the same crime today. It's not clear how many of the tens of thousands of drug offenders currently imprisoned would be viable candidates for consideration.

The Obama administration has said it is working to correct the legacy of an old sentencing structure that subjected black convicts to long prison terms for crack cocaine convictions while giving far more lenient sentences to those caught with powder, who were more likely to be white. The Fair Sentencing Act reduced that disparity and eliminated a five-year mandatory minimum for first-time possession of crack, and officials are now turning their attention to identifying inmates who received sentences under the old guidelines that now appear unduly harsh.

Besides the clemency actions, the Justice Department has also taken steps to scale back the use of harsh prison sentences for certain drug-related crimes. In August, Attorney General Eric Holder directed prosecutors to not charge low-level, non-violent drug offenders with crimes that impose mandatory minimum sentences.

President Barack Obama, who granted only one commutation in his first term, in December cut short the sentences of eight prisoners he said had been locked up too long for drug crimes.

The White House has said it is seeking additional good candidates to consider for clemency, though spokesman Jay Carney said Monday that the number of commutations "will depend entirely on the number of worthy candidates."