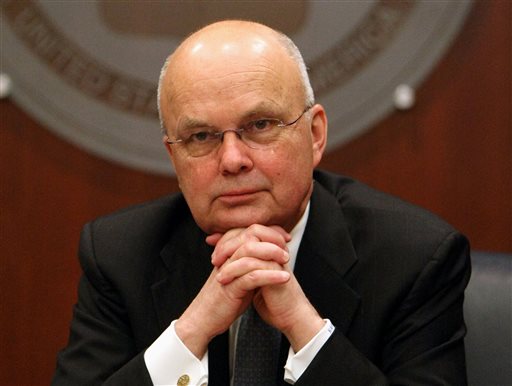 Former CIA Director Michael Hayden, and a former National Security Agency (NSA) chief, participating in a news conference at CIA headquarters in Langley, Va. At the center of a hotly disputed Senate torture report is America’s biggest counterterrorism success of all: the killing of Osama bin Laden. The still-classified, 6,200-page review concludes that waterboarding and other harsh interrogation methods provided no key evidence in the hunt for bin Laden, according to congressional aides and outside experts familiar with the investigation. The CIA still disputes that conclusion.

WASHINGTON (AP) — The Senate Intelligence Committee's expected vote to approve declassifying part of a secret report on Bush-era interrogations of terrorism suspects puts the onus on the CIA and a reluctant White House to speed the release of one of the most definitive accounts about the government's actions after the 9/11 attacks.

Even as Thursday's vote neared, members of the intelligence community raised concerns that the committee failed to interview top spy agency officials who had authorized or supervised the brutal interrogations. They questioned how the review could be fair or complete.

Once the 15-member panel votes as expected to declassify a 400-page summary and the key findings of its report, the CIA will start scanning the report's contents for any passages that compromise national security. That has led to fears that the CIA, already accused of illegally monitoring the Senate's investigation and deleting files, could sanitize key elements of what Senate investigators aim to be the fullest public reckoning of the "enhanced interrogation techniques" used on al-Qaida suspects in CIA-run prisons abroad. The committee's chairwoman, Sen. Dianne Feinstein, D-Calif., has urged the White House to get involved.

"It's important to tell the world, 'Yes, we made a mistake and we're not going to do it again,'" said Sen. Angus King, a Maine independent who plans to vote for the summary's release. The CIA "significantly overestimated" the value of waterboarding, or simulated drowning, and other techniques that only can be defined as torture, he said. The agency never conducted a rigorous internal examination of the effectiveness of its interrogation methods, he told The Associated Press in a telephone interview.

But some in the intelligence community said the Senate report, which was written by the committee's Democratic staff, was missing a key element: the voices of key CIA officials. Those missing include former Bush administration officials involved in authorizing the use of waterboarding and other harsh questioning methods, or managing their use in secret "black site" prisons overseas.

"Neither I or anyone else at the agency who had knowledge was interviewed," said Jose Rodriguez, the CIA's chief clandestine officer in the mid-2000s, who had operational oversight over the detention and interrogation program. "They don't want to hear anyone else's narrative," he said of the Senate investigation. "It's an attempt to rewrite history."

Rodriguez himself is a key figure in the Senate report, not least for his order in 2005 to destroy 92 videotapes showing waterboarding of terror suspects and other harsh techniques.

King acknowledged the lack of those interviews was "regrettable." But he said Senate investigators were unable to talk to relevant CIA officials because of legal constraints posed by a separate investigation from 2009 to 2012 and ordered by Attorney General Eric Holder. At Holder's direction, John Durham, an independent prosecutor, conducted several criminal probes related to interrogation methods and evidence destruction.

Durham's investigations concluded without any charges filed just a few months before the Senate panel voted in December 2012 to approve its 6,300-page report. The CIA declined to comment on the process.

Rodriguez said the Senate's report would be a "travesty" without input from him and officials such as former CIA directors Michael Hayden and Porter Goss. Congressional aides said the CIA's own field reports, internal correspondence, cables and other documents described day-to-day handling of interrogations and the decision-making and actions of Rodriguez and others.

Congressional aides and outside experts familiar with the document say it is highly critical of waterboarding and other harsh interrogation methods, and concludes among other things that such practices provided no key evidence in the hunt for Osama bin Laden. The CIA disputes many of the conclusions in the report.

Senate investigators have griped for years about what they contend is the CIA's failure to be held accountable for the harsh methods used during the George W. Bush administration's war on terror. Bad blood between Senate aides and the CIA ruptured into the open last month when Feinstein took to the Senate floor to accuse the agency of improperly monitoring the computer use of Senate staffers and deleting files, undermining the Constitution's separation of powers. The CIA alleges the Senate panel illegally accessed certain documents. The Justice Department is reviewing criminal complaints against each side.

Declassifying parts of the torture report could exacerbate the dispute, as CIA officials scrutinize any disclosures that might damage national security. Revelations that are embarrassing but don't compromise intelligence sources or methods aren't supposed to be blacked out.

Feinstein said this week she had "no idea" how long a declassification process would take, but expressed hope that it could be resolved in a matter of weeks.

The process normally would be headed by the CIA's Intelligence Management unit. The agency's general counsel's office would also likely be involved, and possibly its publications review specialists.

But the political sensitivity of the Senate's report means it may be handled differently.

A looming problem is the possible involvement of CIA officials who were closely involved in the interrogation program. Former intelligence officials say the agency often farms out declassification sections to officials previously involved in those operations, and Feinstein has raised concerns specifically about a former CIA lawyer who advised the interrogation unit and was responsible for the criminal complaint against her staff members earlier this year.

Declassification could also take longer because of future terror trials and the need to involve other federal agencies for reviews. Because the secret Senate report cites the cases of several al-Qaida militants facing military commission trails, including accused 9/11 mastermind Khalid Sheikh Mohammed, the Pentagon and FBI also could be consulted.

Amid all the distrust, Senate Democrats are pressing for President Barack Obama to step into the fray.

Obama, who outlawed waterboarding after taking office, sought Guantanamo's closure and released long-secret, Bush-era legal documents on harsh interrogations, has publicly supported declassification of at least the findings of Senate committee's report "so that the American people can understand what happened in the past, and that can help guide us as we move forward."

Still, the president has so far declined to weigh in publicly on Congress' dispute with the CIA.