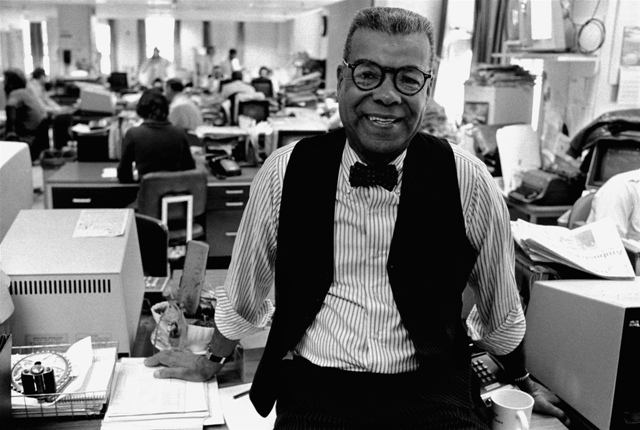 In this Feb. 15, 1984, file photo, newspaper columnist Chuck Stone poses in the newsroom of the Daily News in Philadelphia. Longtime journalist and educator Charles Sumner "Chuck" Stone Jr., one of the founders of the National Association of Black Journalists, has died. He was 89. Allegra Stone said that her father died Sunday, April 6, 2014, at an assisted living facility in Chapel Hill. He'd been a journalism professor at the University of North Carolina for 14 years starting in 1991. (AP Photo/File)

CHAPEL HILL, N.C. (AP) — Longtime journalist and educator Charles Sumner "Chuck" Stone Jr, one of the founders of the National Association of Black Journalists, has died. He was 89.

Allegra Stone said that her father died Sunday at an assisted living facility in Chapel Hill, N.C. He'd been a journalism professor at the University of North Carolina for 14 years starting in 1991.

Many who helped launch the NABJ credited Stone as the driving force behind its founding, said the association's current president Bob Butler.

"Chuck chaired the first meeting and became the first president. He provided the rudder that steered NABJ at a time when being a member was not always easy. Some employers back then told members to choose between their jobs and NABJ," Butler said in a news release.

After serving as a Tuskegee Airman in World War II, Stone was a writer and editor at influential black publications in New York, Washington and Chicago through the early 1960s, using his writing to urge the Kennedy administration to advance the cause of civil rights. Subsequently, he served as an adviser to U.S. Rep. Adam Clayton Powell of New York.

His reputation grew after he was hired as the first black columnist for the Philadelphia Daily News, where he worked as a columnist and editor from 1972 to 1991. He was known for being outspoken on discrimination, police brutality and racism.

Despite the grave subject matter he tackled, he was a joy to be around in the newsroom, said novelist Pete Dexter, who worked alongside Stone as a columnist at the Daily News.

"He was one of those people who makes you feel good just to bump into him when you came into the office because he was so happy where he was and doing what he did," Dexter said.

Dexter said Stone's work resonated with the Daily News' black readership in a time of racial strife in the city.

"I can't tell you how divided racially Philadelphia was when I got there. It was nothing like it is now. Chuck spoke mostly for and to the black community, and for that there were a lot of people who kind of despised him."

His family said dozens of suspects turned themselves into Stone before the authorities because of his efforts to hold the criminal justice system accountable. He was also credited with helping to negotiate the release of six guards at a Pennsylvania prison who were held hostage by inmates in 1981.

"I damn near had a nervous breakdown," Stone later told The Philadelphia Inquirer. "I spent two days negotiating and they released the hostages after the second day. So then when people got in trouble and there were hostages . . . they said, 'call Chuck Stone to get us out of this.'"

Stone was born in St. Louis in 1924 and was raised in Connecticut. After his time in the military, he graduated from WesleyanCollege and earned a master's degree in sociology from the University of Chicago.