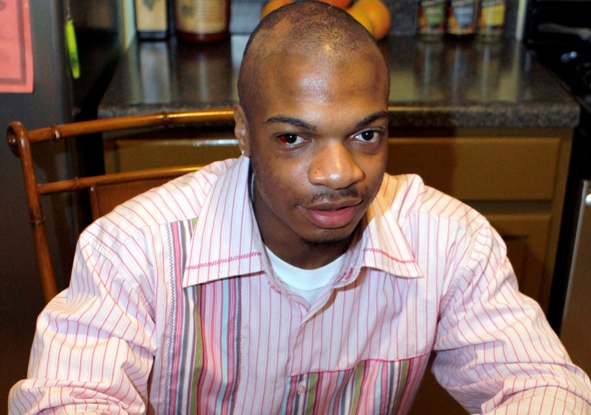 In this Jan. 22, 2010 file photo, Jordan Miles, then an 18-year-old high school student, talks about his hopes to go to college to study crime scene investigation at his home in Pittsburgh. Three white officers accused in a federal civil rights lawsuit of beating Miles falsely arrested him but didn't use excessive force, a jury found Monday, March 31, 2014, awarding him $119,000 in damages. (AP Photo/Keith Srakocic, File)

The split verdict by the all-white jury of four men and four women had attorneys for 22-year-old Jordan Miles and the officers — David Sisak, Michael Saldutte and Richard Ewing — claiming victory, with neither side completely satisfied.

The jurors awarded Miles $101,016.75 in compensatory damages and $6,000 from each officer for punitive damages for acting "maliciously and wantonly."

Miles' attorney, Joel Sansone, said he was gratified but didn't understand how the jurors decided on the damages or concluded police were wrong to arrest Miles but not to beat him.

"The only thing he wanted to hear was that these officers did the wrong thing," Sansone said of Miles, "and he heard that in the courtroom today."

Robert Leight, the attorney for Ewing — who has since left the city police force to work in the suburbs — said the verdict "makes no sense."

Jurors leaving the courthouse declined to comment, leaving unclear how they viewed the conflicting accounts of what happened the night of Jan. 12, 2010.

Miles contends he was talking on his cellphone while walking to his grandmother's when the plainclothes officers rolled up in an unmarked car asking for money, drugs and a gun without identifying themselves. His lawyers argued that "jump out" tactic — which police denied using — is designed to catch suspected drug dealers off-guard.

The officers maintain they flashed their badges and yelled "Police!" and stopped Miles only because he appeared to be lurking near a neighbor's home. They claim Miles panicked and ran after being asked why he was "sneaking around" — and the confrontation escalated when Miles elbowed Saldutte in the head, then kicked Sisak in the knee, before officers mistook a "bulge" in Miles' coat pocket for a gun.

The officers acknowledge kneeing and punching Miles to subdue him before determining the bulge was a bottle of Mountain Dew. Miles denies even carrying the bottle, which officers said they threw away because it wasn't evidence of the prowling, assault and resisting arrest charges they filed against Miles.

"Clearly this is a compromise verdict," Wymard said. "All along the excessive force is what we were worried about," and laughing, "Hah!" when told Miles said he didn't care about money he failed to win on that claim."

But Leight said the verdict proves the Justice Department was right not to prosecute the officers — especially because the burden of proof in a criminal case is even higher than in Miles' lawsuit.

Miles' attorneys previously demanded $2 million to settle the case and rejected the city's offer of $180,000. The city, instead, paid $75,000 to settle Miles' claims against the government itself, with the understanding that money would be deducted from any damages award against the officers.

Because more than $41,000 of the verdict was covered by city insurance, the city's $75,000 could be deducted from the remaining $78,000 — leaving Miles with a net award of $3,000, Wymard and Campbell said. And Miles could still wind up paying some of the officers' attorneys' fees because he didn't win the case outright.

Sansone said he was still researching those claims and couldn't immediately comment, but Wymard said, "Eventually, Miles may well be writing the City of Pittsburgh a check in this case."