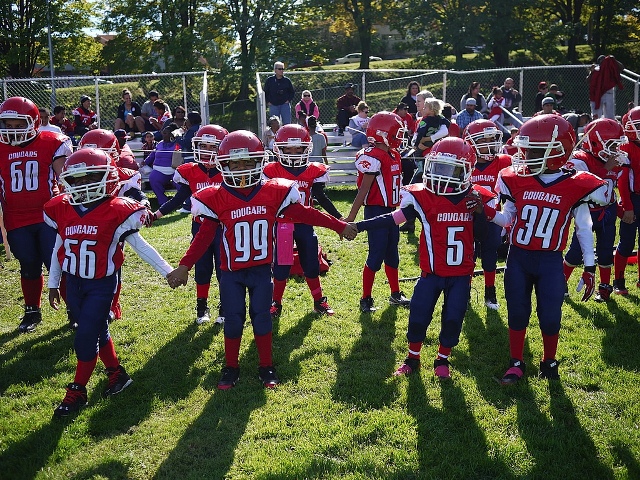 A little league team kicks off its playing season in Seattle. More research is showing even the youngest African American tykes are disproportionately suspended and expelled from American schools. Susan Fried photo

WASHINGTON (AP) — Sixty years ago, the Supreme Court ruled that black children have the right to the same education as their white peers.

But civil rights data released Friday by the Education Department reflect an education system rife with inequities for blacks and other minority students and those with disabilities.

(Read The Skanner News 2012 series, 'The School to Prison Pipeline')

Minority students are less likely to have access to advanced math and science classes and veteran teachers. Black students of any age, even the youngest preschoolers, are more likely to be suspended. And students with disabilities are more likely than other students to be tied down or placed alone in a room as a form of discipline.

"It is clear that the United States has a great distance to go to meet our goal of providing opportunities for every student to succeed," said Education Secretary Arne Duncan.

But the department offered no explanation of why these disparities exist.

Here are five things to know about the department's findings:

STEM is the buzzword in education these days. Education in the fields of science, technology and engineering and math is considered critical for students to succeed in the global marketplace. Yet the department found that there was a "significant lack of access" to core classes like algebra, geometry, biology, and chemistry for many students. That lack of access was particularly striking when it came to minorities.

"A quarter of high schools with the highest percentage of black and Latino students do not offer Algebra II; a third of these schools do not offer chemistry," the department said.

And it's not just lack of access to core curriculum subjects.

Only a quarter of black and Latino students were enrolled in an Advanced Placement class, which allows high school students to earn college credit, and fewer than one in five got a high enough score generally necessary to get college credit.

Even as black and Latino students represent 40 percent of the enrollment in schools offering gifted and talented programs, they represent only a quarter of the students in their schools enrolled in them.

Christopher Emdin, a professor of science education at Teachers College, ColumbiaUniversity, said if a school doesn't offer advanced math and science classes, students are told they are not expected to take those classes.

"There is nothing more severe in contemporary America, particularly as it relates to youth of color, than the soft bigotry of low expectations," Emdin said. "These inequities in the availability of science and math classes show young people that not much is expected of them. It highlights a subtle and severe bias that we will collectively suffer from as our STEM jobs continue to go unfilled, and our young people refuse to be scientists and engineers."

Quality teachers can play a key role in student performance.

Minority students are more likely to attend schools with a higher concentration of first-year teachers than white students. And while most teachers are certified, nearly half a million students nationally attend schools where nearly two-thirds or fewer of teachers meet all state certification and licensing requirements. Black and Latino students are more likely than white students to attend these schools.

There's also a teacher salary gap of more than $5,000 between high schools with the highest and lowest black and Latino students enrollments, according to the data.

Maddie Fennell, a literacy coach at Miller Park Elementary, an urban school in Omaha, Neb., said that too often in teaching, the mindset is that the more experienced a teacher is, the more deserving the teacher is of a less-challenging school environment. She said this doesn't make sense because, in comparison, an experienced surgeon wouldn't be given the healthiest patients. Ultimately, she said, the most qualified teachers will request to follow strong principals.

"A lot of it has to do with the leadership of a (school) building," Fennell said.

The Obama administration issued guidance earlier this year encouraging schools to abandon what it described as overly zealous discipline policies that send students to court instead of the principal's office, the so-called "schools-to-prisons pipeline." But even before the announcement, school districts had been adjusting policies that disproportionately affected minority students. The civil rights data released Friday from the 2011-2012 school year show the disparities begin among even the youngest of school kids. Black children represent about 18 percent of children in preschool programs in schools, but they make up almost half of the preschoolers who are suspended more than once. Six percent of the nation's districts with preschools reported suspending at least one preschool child.

Overall, the data show that black students of all ages are suspended and expelled at a rate that's three times higher than that of white children. Even as boys receive more than two-thirds of suspensions, black girls are suspended at higher rates than girls of any other race or most boys. More than half of students involved in school-related arrests or referred to law enforcement were Hispanic or black.

Democrats Tom Harkin, D-Iowa, and Rep. George Miller, D-Calif., have unsuccessfully fought for a federal law for years to end the practice. National associations representing school boards and superintendents have said such legislation would reduce the authority of states and districts, but that seclusion and restraint should only be used as a last resort to protect school staff and students.

The Obama administration views access to preschool as a civil rights issue. It says 40 percent of school districts do not offer preschool programs. Their numbers don't include private programs or some other types of publicly funded early childhood programs outside of school systems. Obama has sought a "preschool for all" program with the goal of providing universal preschool to America's 4-year-old that would use funding from a hike in tobacco taxes.