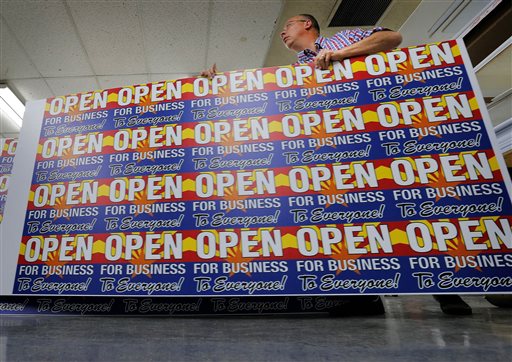 PHOTO: Scott Koehler, the sales director at Fast Signs, takes a sheet of anti-Senate Bill 1062 signs that read "Open For Business To Everyone" off the printer, Wednesday, Feb. 26, 2014 in Phoenix. Arizona.

NEW YORK (AP) — When an important social issue intersected with business in Arizona, Corporate America decided it was time to take a stand.

Voicing concern for their employees, customers and bottom lines, prominent companies from American Airlines to Verizon used threats of reduced business to help convince Arizona Gov. Jan Brewer to veto legislation that would have allowed businesses to refuse service to gays based on the owner's religious beliefs.

Companies have long spoken out about certain issues they felt threatened their bottom lines, such as taxation and the minimum wage. The strong opposition to the Arizona bill signals an acknowledgement by businesses that it's not just economic policies that can be harmful to their profits. They need to be more willing than ever to wade into social issues.

Companies also recognize that many of their employees and customers are gay and try to foster an open and inviting corporate environment.

“Business used to restrict itself to economic issues but they're now seeing the importance of other kinds of issues,” said Darrell M. West, vice president of governance studies at the Brookings Institution.

The measure Brewer vetoed Wednesday night would have allowed people to cite their religious beliefs as a defense against claims of discrimination. She faced intense pressure from gay rights supporters, prominent politicians and local businesses. But ultimately, it might have been the national business community that tipped the scales.

“They seem to have had a dramatic impact on the decision,” West said. “When you get major companies weighing in about the possible negative impact, that makes a big difference.”

Arizona is a large tourism and convention destination. The state is the spring training home to several Major League Baseball teams and is hosting the Super Bowl next year. When Brewer signed an immigration bill in 2010 that sought to identify and deport illegal immigrants, there was nationwide backlash. Numerous companies and trade groups moved their annual conferences and retreats to other states.

The business community warned against a similar type of boycott this time.

“They played a major role in stopping this bill from becoming law. It's pretty simple: when the businesses that fuel our economic growth voiced this level of urgency, lawmakers pay attention,” said Jace Woodrum, director of communications for the Equality Federation, a national advocacy group for lesbian, gay, bisexual and transgender people.

American Airlines CEO Doug Parker suggested his airline would cut flights if the state's business, tourism and convention industry didn't remain healthy. Although he just moved his company's headquarters from Arizona to Texas, American — and its US Airways subsidiary — is still the largest airline in Phoenix.

“There is genuine concern throughout the business community that this bill, if signed into law, would jeopardize all that has been accomplished so far,” Parker wrote in a letter to the governor.

Parker noted that “few states suffered as greatly during the recession as Arizona” and that the region is showing great signs of an economic comeback.

Verizon CEO Lowell C. McAdam also flexed some muscle, noting that Verizon has 2,500 Arizona employees, spent $1.4 billion on its in-state network and has more than 2.6 million customers there.

“It is our hope to continue to grow our business in Arizona, but legislation like (this bill) is extremely harmful to pursuing this objective,” McAdam wrote.

Other companies, such as Intel, PetSmart, American Express, eBay and GoDaddy joined with local and state chambers of commerce and other business collations, signing letters in opposition to the bill, known as SB 1062. One after another delivered the same clear message: This is discriminatory and bad for the bottom line.

— Yelp: “This bill goes against the rule that every great business subscribes to, which is that the customer is always right.”

— Marriott: “This legislation has the potential to subject our state to travel boycotts.”

— Southwest Airlines: “Already, even just the discussion surrounding (the bill) has had a profound and immediate impact on the Arizona tourism industry and on our company.”

— Starwood Hotels: “We expect a significant number of tourists, event planners and even corporations will react hostilely to passage of (this bill) and will choose to book trips and events other than in Arizona.”

“Business leaders feel emboldened to speak out on a wide range of issues now,” West, of the Brookings Institute, said. “They understand that they have a platform and are using it more and more.”

Scott Mayerowitz can be reached at http://twitter.com/GlobeTrotScott.