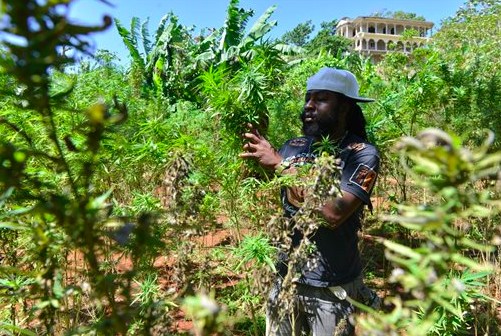 a former colonial mansion in Jamaica, politicians huddle to discuss trying to ease marijuana laws in the land of the late reggae musician and cannabis evangelist Bob Marley. In Morocco, one of the world's top producers of the concentrated pot known as hashish, two leading political parties want to legalize its cultivation, at least for medical and industrial use.

And in Mexico City, the vast metropolis of a country ravaged by horrific cartel bloodshed, lawmakers have proposed a brand new plan to let stores sell the drug.

From the Americas to Europe to North Africa and beyond, the marijuana legalization movement is gaining unprecedented traction — a nod to successful efforts in Colorado, Washington state and the small South American nation of Uruguay, which in December became the first country to approve nationwide pot legalization.

Leaders long weary of the drug war's violence and futility have been emboldened by changes in U.S. policy, even in the face of opposition from their own conservative populations. Some are eager to try an approach that focuses on public health instead of prohibition, and some see a potentially lucrative industry in cannabis regulation.

"A number of countries are saying, 'We've been curious about this, but we didn't think we could go this route,'" said Sam Kamin, a University of Denver law professor who helped write Colorado's marijuana regulations. "It's harder for the U.S. to look at other countries and say, 'You can't legalize, you can't decriminalize,' because it's going on here."

U.S. President Barack Obama recently told The New Yorker magazine that he considers marijuana less dangerous to consumers than alcohol, and said it's important that the legalization experiments in Washington and Colorado go forward, especially because blacks are arrested for the drug at a greater rate than whites, despite similar levels of use.

His administration also has criticized drug war-driven incarceration rates in the U.S. and announced that it will let banks do business with licensed marijuana operations, which have largely been cash-only because federal law forbids financial institutions from processing pot-related transactions.

Such actions underscore how the official U.S. position has changed in recent years. In 2009, the U.S. Department of Justice announced it wouldn't target medical marijuana patients. In August, the agency said it wouldn't interfere with the laws in Colorado and Washington, which regulate the growth and sale of taxed pot for recreational use.

Government officials and activists worldwide have taken note of the more open stance. Also not lost on them was the Obama administration's public silence before votes in both states and in Uruguay.

It all creates a "sense that the U.S. is no longer quite the drug war-obsessed government it was" and that other nations have some political space to explore reform, said Ethan Nadelmann, head of the nonprofit Drug Policy Alliance, a pro-legalization group based in New York.

Anxiety over U.S. reprisals has previously doused reform efforts in Jamaica, including a 2001 attempt to approve private use of marijuana by adults. Given America's evolution, "the discussion has changed," said Delano Seiveright, director of Ganja Law Reform Coalition-Jamaica.

Last summer eight lawmakers, evenly split between the ruling People's National Party and the opposition Jamaica Labor Party, met with Nadelmann and local cannabis crusaders at a luxury hotel in Kingston's financial district and discussed next steps, including a near-term effort to decriminalize pot possession.

Officials are concerned about the roughly 300 young men each week who get criminal records for possessing small amounts of "ganja." Others in the debt-shackled nation worry about losing out on tourism dollars: For many, weed is synonymous with Marley's home country, where it has long been used as a medicinal herb by families, including as a cold remedy, and as a spiritual sacrament by Rastafarians.

Influential politicians are increasingly taking up the idea of loosening pot restrictions. Jamaica's health minister recently said he was "fully on board" with medical marijuana.

"The cooperation on this issue far outweighs what I've seen before," Seiveright said. "Both sides are in agreement with the need to move forward."

In Morocco, lawmakers have been inspired by the experiments in Washington, Colorado and Uruguay to push forward their longstanding desire to allow cannabis to be grown for medical and industrial uses. They say such a law would help small farmers who survive on the crop but live at the mercy of drug lords and police attempts to eradicate it.

"Security policies aren't solving the problem because it's an economic and social issue," said Mehdi Bensaid, a legislator with the Party of Authenticity and Modernity, a political party closely allied with the country's king. "We think this crop can become an important economic resource for Morocco and the citizens of this region."

In October, lawmakers from Uruguay, Mexico and Canada converged on Colorado for a firsthand look at how that state's law is being implemented. They toured a medical marijuana dispensary and sniffed bar-coded marijuana plants as the dispensary's owner gave them a tour.

There's no general push to legalize marijuana in Mexico, where tens of thousands have died in cartel violence in recent years. But in liberal Mexico City, legislators on Thursday introduced a measure to let stores sell up to 5 grams of pot. It's supported by the mayor but could set up a fight with the conservative federal government.

"Rather than continue fighting a war that makes no sense, now we are joining a cutting-edge process," said Jorge Castaneda, a former Mexican foreign minister.

Opponents to legalization worry that pot could become heavily commercialized or that increased access will increase youth use. They say the other side's political victories have reawakened their cause.

"There's been a real hunger from people abroad to find out how we got ourselves into this mess in the first place and how to avoid it," said Kevin Sabet of Project Smart Approaches to Marijuana.

Washington and Colorado passed recreational laws in 2012 to regulate the growth and sale of taxed pot at state-licensed stores. Sales began Jan. 1 in Colorado, and are due to start later this year in Washington. Twenty states and the District of Columbia already have medical marijuana laws.

A number of U.S. states are considering whether to try for recreational laws. Voters in Alaska will have their say on a legalization measure this summer. Oregon voters could also weigh in this year, and in California, drug-reform groups are deciding whether to push a ballot measure in 2014 or wait until 2016's presidential election. Abroad, activists are pushing the issue before a United Nations summit in 2016.

While some European countries, including Spain, Belgium and the Czech Republic, have taken steps over the years to liberalize pot laws in the face of international treaties that limit drug production to medical and research purposes, the Netherlands, famous for its pot "coffee shops," has started to pull back, calling on cities to close shops near schools and ban sales to tourists.

There is, however, an effort afoot to legitimize the growing of cannabis sold in the coffee shops. While it's been legal to sell pot, it's not to grow it, so shops must turn to the black market for their supply, which may wind up seized in a raid.

In Latin America and the Caribbean, where some countries have decriminalized possession of small amounts of drugs, from cocaine to marijuana, there is significant public opposition to further legalization. But top officials are realizing that it is nevertheless on the table, despite the longstanding efforts of the U.S., which has provided billions of dollars to support counter-narcotics work in the hemisphere.

Current or former presidents in Colombia, Mexico, Guatemala and Brazil have called for a re-evaluation of or end to the drug war, a chorus echoed by Argentina's drug czar, Juan Carlos Molina, a Roman Catholic priest who has long served in the nation's drug-wasted slums.

Molina said he's following orders from President Cristina Fernandez to change the government's focus from enforcing drug laws against young people to getting them into treatment. He also said after Fernandez appointed him in December that Argentine society is ready to openly debate legalizing marijuana altogether.

"I believe that Argentina deserves a good debate about this. We have the capacity to do it. The issue is fundamental for this country," Molina said in an interview with Radio del Plata.

The pace of change has put American legalization activists in heavy demand at conferences in countries weighing their drug laws, including Chile, Poland and the Netherlands. The advocates, including those who worked on the efforts in Washington and Colorado, have advised foreign lawmakers and activists on how to build campaigns.

Clara Musto, a spokeswoman for the Uruguayan campaign, said meeting with the Americans helped her group see that it would need to promote arguments beyond ensuring the liberty of cannabis users if it wanted to increase public support. "They knew so much about how to lead," she said.

John Walsh of the Washington Office on Latin America, a non-governmental organization that works to promote social and economic justice, was among the Americans who visited Uruguay as the president, the ruling party and activists pushed their proposal to create a government-controlled marijuana industry.

"This isn't just talk," he said. "Whether Colorado is going to do it well, or Washington, they're doing it. If you're going to pursue something similar, you're not going to be alone."