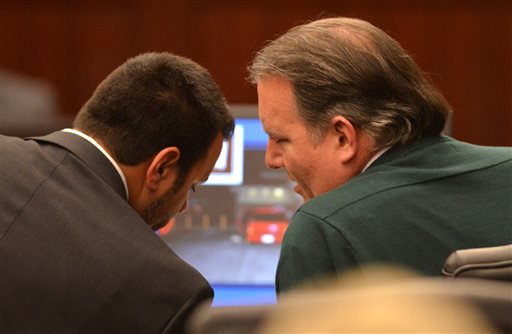 JACKSONVILLE, Fla. (AP) — A 47-year-old Florida man reacted viciously to an argument over loud music with teenagers in a store parking lot and fired multiple shots into their vehicle, killing one of them, and then drove away as if nothing happened, a prosecutor said Wednesday during closing arguments at the man's trial.

Defense attorneys argued, however, that the state failed to prove its case or show that Michael Dunn hadn't acted in self-defense.

Jurors began deliberating in the late afternoon on whether Dunn committed first-degree murder when he fatally shot 17-year-old Jordan Davis outside a Jacksonville convenience store in 2012. Dunn, who is pleading not guilty, faces life in prison if convicted of that charge.

They deliberated for three hours Wednesday night before recessing for the night. Before they left, they asked to see a convenience store security video that captured sounds of the gunshots. They said they wanted to watch the video on Thursday.

Besides first-degree murder, jurors could also consider the lesser crimes of second-degree murder or manslaughter, according to the jury instructions. Dunn also is charged with attempted murder for shots fired at Davis' three friends.

In order to conclude that the killing was justifiable, jurors must believe it occurred while resisting an attempt to murder or commit a felony against Dunn, Circuit Judge Russell Healey told jurors.

Assistant State Attorney Erin Wolfson told jurors that the evidence clearly shows Davis was unarmed when Dunn fired 10 shots at a Dodge Durango where Davis was sitting. Wolfson said no witnesses saw any of the four teenagers in the vehicle with a weapon and police searches turned up none.

“This defendant was disrespected by a 17-year-old teenager, and he lost it. He wasn't happy with Jordan Davis' attitude. What was his response? 'You're not going to talk to me like that,'“ Wolfson said. “He took these actions because it was premeditated. It was not self-defense.”

Dunn's attorney Cory Strolla told jurors that the state had failed to prove its case or disprove Dunn's assertion he acted in self-defense.

“Not one single witness said this man (Dunn) showed any signs of anger,” he said.

Strolla argued that there were no signs Dunn was planning to do anything that night and only asked the teens in the car to turn down the music. Strolla said they initially did, only to turn it back up again.

Strolla said Dunn only fired his gun when he saw Davis wielding a weapon from inside the Durango and felt threatened.

“He's had that gun for 20 years and never pulled it once,” Strolla said. “He told you that nobody has ever scared him, no one has ever threatened him like that.”

Police didn't find a weapon in the SUV, but Strolla contended that the teens got rid of it during the three minutes they were in an adjacent parking lot after fleeing the gunshots. He said detectives should have immediately gone to the area and searched, but didn't.

In his testimony Tuesday, Dunn told jurors he was in Jacksonville with his fiancee, Rhonda Rouer, to attend his son's wedding. Dunn said he and Rouer went to the convenience store for wine and chips. He said he pulled in next to an SUV playing loud music.

“My rear view mirror was shaking. My eardrums were vibrating. It was ridiculously loud,” Dunn said.

Dunn said he asked the teens to turn down the music and they turned it off. “I said, 'Thank you,'“ Dunn said. But soon afterward, Dunn said he heard someone in the SUV shouting expletives and the word “cracker” at him. Dunn is white, and the teens in the SUV were black. Cracker is a derogatory term for white people.

The music was turned back on, and Dunn testified, “I wasn't going to ask for favors anymore.”

Dunn said the men in the SUV had “menacing expressions,” and he asked the teens whether they were talking about him. He said he wanted to calm down the situation but saw a teen in the backseat reach down for something. Dunn said it looked as if the barrel of a shotgun was sticking out the window.

One of the teens stepped out of the SUV, Dunn said, and he felt “this was a clear and present danger.” He reached for his pistol in a glove box.

Dunn, who had a concealed-weapons permit, fired nine shots into the car, according to an affidavit. Authorities say a 10th shot fired by Dunn missed the car. Once his fiancee returned to the car, he drove off out of fear of the SUV returning, he said.

Dunn said he told Rouer on the drive back to the hotel that he had shot in self-defense. But Rouer, called by prosecutors as a rebuttal witness, said Dunn never told her he thought Davis had a gun.

Dunn and Rouer drove back to their hotel and Dunn said he didn't call the police because his focus was on the well-being of Rouer, whom he described as hysterical. The next morning, Dunn said, Rouer insisted she wanted to go home and they drove back to their home in Brevard County, 175 miles away. There, Dunn said he contacted a neighbor who is in law enforcement for advice on how to turn himself in.

In her closing argument, Wolfson said the actions Dunn took after the shooting are those of someone who thought he wouldn't get caught.

“This defendant didn't tell anyone because he thought he had gotten away with murder,” the prosecutor said.