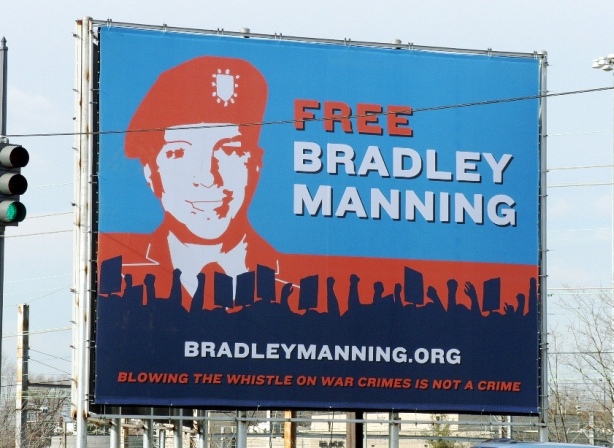 A U.S. Army private, Manning was jailed for 35 years in 2013 for leaking U.S. video and documents that revealed abuses of civilians and other information embarrassing to the U.S. military and government. After her arrest she came out as a transgendered person. She currently is incarcerated in Leavenworth prison.

Manning's treatment in custody was described by Juan E. Mendez, a United Nations Special Rapporteur on torture, as  cruel, inhuman and degrading.”  And prompted the resignation of State department official Phillip Crowley.

The award comes from the Sam Adams Associates for Integrity in Intelligence, a group of retired CIA officers, and goes to someone in the intelligence world who takes a stand for integrity and ethics. It is named after a Vietnam –era CIA whistleblower Samuel A. Adams.

In the press release, the group says:

“A Nobel Peace Prize nominee, U.S. Army Pvt. Manning is the 25 year-old intelligence analyst who in 2010 provided to WikiLeaks the "Collateral Murder" video – gun barrel footage from a U.S. Apache helicopter, exposing the reckless murder of 12 unarmed civilians, including two Reuters journalists, during the “surge” in Iraq.   The Pentagon had repeatedly denied the existence of the "Collateral Murder" video and declined to release it despite a request under the Freedom of Information Act by Reuters, which had sought clarity on the circumstances of its journalists' deaths.”

Release of this video and other documents sparked a worldwide dialogue about the importance of government accountability for human rights abuses as well as the dangers of excessive secrecy and over-classification of documents.

On February 19, 2014 Pvt. Manning -  currently incarcerated at Leavenworth Prison - will be recognized at a ceremony in absentia at Oxford University's prestigious Oxford Union Society for casting much-needed daylight on the true toll and cause of civilian casualties in Iraq; human rights abuses by U.S. and “coalition” forces, mercenaries, and contractors; and the roles that spying and bribery play in international diplomacy.

On August 21, 2013 Pvt. Manning received an unusually harsh sentence of 35 years in prison for exposing the truth -- a chilling message to those who would call attention to wrongdoing by U.S. and “coalition” forces.

Former senior NSA executive and SAAII Awardee Emeritus Thomas Drake has written that Manning "exposed the dark side shadows of our national security regime and foreign policy follies .. [her] acts of civil disobedience … strike at the very core of the critical issues surrounding our national security, public and foreign policy, openness and transparency, as well as the unprecedented and relentless campaign by this Administration to snuff out and silence truth tellers and whistleblowers in a deliberate and premeditated assault on the 1st Amendment."

The Sam Adams Associates for Integrity in Intelligence are very proud to add Pvt.  Manning to this list of distinguished awardees.”