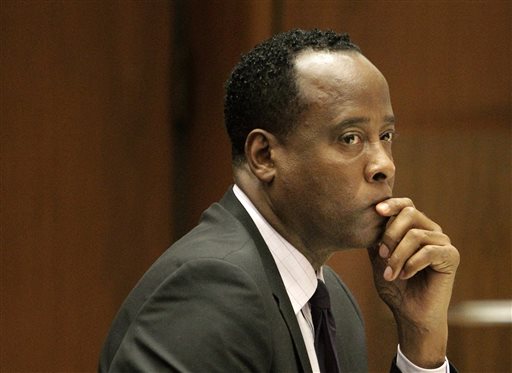 LOS ANGELES (AP) — An appellate court on Wednesday unanimously upheld the involuntary manslaughter conviction of Michael Jackson's doctor, determining there was substantial evidence of his guilt presented at trial.

The ruling by the California 2nd District Court of Appeal came less than three months after former cardiologist Conrad Murray was released. He served two years in jail for causing Jackson's 2009 death.

The 68-page ruling includes lengthy recitations of the evidence against Murray, who was convicted in 2011 of giving Jackson a lethal dose of the anesthetic propofol in June 2009 while the superstar was preparing for a series of comeback concerts titled “This Is It.”

The six-week trial focused on Murray's care of Jackson, including nightly doses of propofol to help the entertainer sleep.

In its opinion, the appeals court determined that Superior Court Judge Michael Pastor was within his right to impose the maximum sentence of four years.

“The evidence demonstrated that Mr. Jackson was a vulnerable victim and that (Murray) was in a position of trust, and that (Murray) violated the trust relationship by breaching standards of professional conduct in numerous respects,” it said.

The former physician was released from jail in October due to a change in California law requiring nonviolent offenders to serve their sentences in county jails and as a result of credits for good behavior.

In his appeal, Murray argued that the judge who oversaw the case improperly excluded jurors from hearing key evidence and should have sequestered jurors.

The appellate court disagreed and said it found no errors in the judge's rulings, including one allowing the trial to be televised.

Murray's trial lawyers attempted to introduce evidence of Jackson's financial difficulties and his treatment by other doctors, but Pastor ruled testimony on those issues would be irrelevant.

Attorney Valerie Wass, who represented Murray in the appeal, said she had not yet read the entire opinion and could not comment on the ruling. A phone message left for Supervising Deputy Attorney General Victoria Wilson was not immediately returned. The Los Angeles County District Attorney's Office, which prosecuted the case, declined comment.

Also on Wednesday, lawyers for Jackson's estate and Certain Underwriters at Lloyd's of London resolved a case of the payout of a $17.5 million tour cancellation and non-appearance policy that was scheduled to go to trial in February. The terms of the settlement were not disclosed.