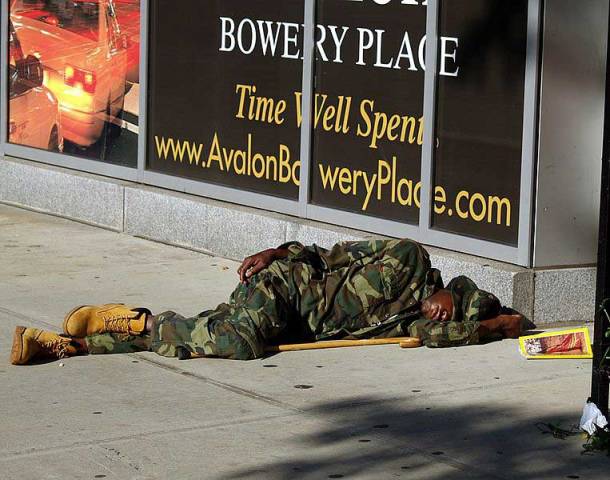 WASHINGTON (NNPA) –The downturn in the economy and a lack of local resources have forced more Americans to live under bridges, in their cars and on the couches of other family members, according to a recent report on hunger and homelessness.

The 25-city survey, conducted by the United States Conference of Mayors, found that more than 20 percent of homeless people that needed help over the past year didn’t get it and 71 percent of the survey cities reported that their emergency shelters, stretched to capacity, had to turn homeless families with children away. Neither Portland nor Seattle were among the cities surveyed, but cities across the country reported similar findings.

The U.S. Conference of Mayors is a nonpartisan group that represents 1,398 cities with populations of 30,000 or more.

According to a 2012 report by the Institute for Children, Poverty and Homelessness, Black families depended on homeless shelters at a rate that was seven times higher than White families.

A majority of the cities surveyed reported that unemployment, rising housing costs, and substance abuse contributed to higher homelessness rates.

Although Blacks often abuse illegal drugs at similar rates as Whites, Blacks suffer discrimination in housing and hiring that often affects how and where they live. The Labor Department reported that the jobless rate for Blacks (12.5 percent) was more than twice as high as the rate for Whites (6.2 percent) in November.

The survey cities also reported that unemployment was the greatest contributor to the rise in hunger, followed by low wages and poverty. Increased food insecurity has strained local resources beyond capacity.

Even though the survey cities spent $324 million and dispersed more than half a billion pounds of food, two-thirds of the cities reported turning people away, because they couldn’t keep up with the growing demand. More than 70 percent of the survey cities said that they expect the hunger problem to get worse next year because of limited resources.

“The problem is more expensive than the solutions,” said Laura Zeilinger, deputy director of the United States Interagency Council on Homelessness.

According to the Center on Budget and Policy Priorities, a public policy group focused on fiscal policy and public programs that affect low- and moderate-income families and individuals, roughly 1.3 million people currently receiving unemployment insurance will be cut off shortly after the Christmas holiday. In six months, almost 2 million people will lose their unemployment benefits.

In order to meet the growing needs of our nation’s most vulnerable citizens, some city officials have augmented nutrition education programs and expanded the health food offerings at food banks. The study reported that Trenton, N.J., is making strides to address hunger by ramping up the outlets that offer fresh produce and offering more free school breakfasts to school children. Providence, R.I., has also offered grants for programs that feed school children during the summer and after school.

In Charlotte, N.C., The Second Harvest Food Bank of Metrolina provides backpacks to children on the weekends with seven pounds of food like cereal bars, fruit cups, canned chicken and peaches. The Backpack Program has grown from 1,277 in FY2007 to 96,326 in FY2013.

According to the report, city officials said that job creation will help to alleviate the pangs of hunger. Investments in the food stamp program, affordable housing and job training also made the list.

“Despite all of our efforts the problems remain,” said Schneider. “Dealing with growing needs in the face of dwindling resources is nothing new for mayors, she said, but this year, mayors are especially concerned about what could happen to our emergency food and shelter programs next year and in the years beyond if the federal budget makes it harder to meet the needs of all of their citizens.

SNAP cuts proposed in Congress will also have a negative effect on the nation’s poorest families.

GOP lawmakers passed legislation in the House of Representatives that will slash the food stamp program by roughly $40 billion over the next 10 years. If passed by both the Senate and signed by the president about three million poor families would lose their benefits every year.

For mayors accustomed to doing more with less over recent years, cuts to the food stamp program will deal a heavy blow to families and communities struggling with poverty.

“Cuts in SNAP benefits being considered by Congress and the inability of food assistance programs to meet the increased demands that would result was identified by most cities as the biggest challenge they would face in addressing hunger in the coming year,” said Helene Schneider, mayor of Santa Barbara, Calif., and chair of the United States Conference of Mayors Hunger and Homelessness Task Force.

The survey cities reported that mainstream assisted housing programs, higher wages and better housing options would help to lessen the burden of homelessness on families and individuals.

“The hunger and homeless issue continues to be with us,” said Tom Cochran, chief executive officer and executive director of the United States Conference of Mayors. “We have been in this fight for three decades and we will continue. The mindset of Washington does not understand what is happening in our neighborhoods and cities large and small across America.”