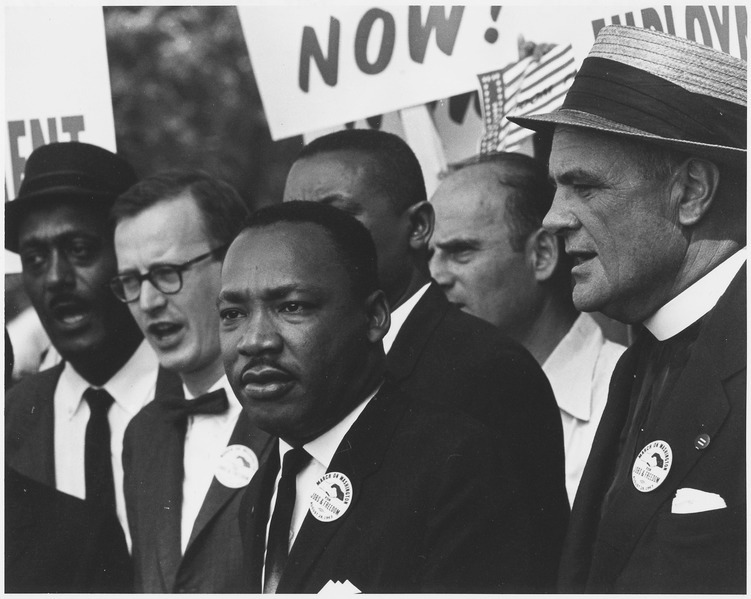 At issue is a lawsuit initiated by King's sons. The points of legal contention are who has the rights to King's words and image, and how far do those rights extend. Young is facing the sons' ire over footage of King that shows up in a series produced by Young's foundation. Another of King's contemporaries also has legal issues with his children - actor Harry Belafonte, in a separate case, is debating ownership of some King documents.

“The question is whose legacy is it? And I agree that it's their legacy, and that the copyright images of their father need to be protected by them, but I also feel that I'm doing the same thing for nothing and I will not give up my right to the legacy for their right to the legacy,” Young said recently in an interview with The Associated Press.

At the heart of the conflict is the lawsuit filed by King's sons, Martin Luther King III and Dexter King, who as chairman and president/CEO control their father's estate including his image and his papers, against The Martin Luther King Jr. Center for Nonviolent Social Change, which is run by King's daughter, Bernice, and where Young is a member of the board.

The estate's suit asks that the center be stopped from using King's image and likeness unless certain conditions are met. Among those conditions is that Young be removed from the center's board of directors over allegations that he used footage of King in a documentary without permission.

The lawsuit was filed Aug. 28, the 50th anniversary of the March on Washington where King made his famous “I Have a Dream” speech.

Young, a King confidante who helped coordinate civil rights efforts throughout the south, disagrees about his use of footage in which he and King appear. “They said I infringed on their copyright. Well, I don't think so, because I think it was my right - it's mine also.”

But despite facing legal action from people he has been close to for years, Young was philosophical.

“I understand the reason for it. I think it's the way things go, and the way probably they ought to go,” the former Atlanta mayor, congressman and United Nations ambassador said. “We took many cases to court, simply to have the doctrines clarified and to have a court consider the merits.”

A lawyer for the King estate, Miles Alexander, declined to comment on any litigation. Bernice King could not be reached for comment.

But the legal actions from King's civil rights heyday are a far cry from what's unfolding through King's children now, said Jelani Cobb, history professor and director of the Institute for African American Studies at the University of Connecticut.

By embracing their father “as a brand,” Cobb said, “his legacy under their stewardship has diminished.”

Belafonte, another of King's confidants and early civil rights supporter, filed suit against the estate in October, seeking a court ruling that he is the rightful owner of some documents related to King that he had planned to auction several years ago.

The items were pulled from auction after the King children challenged his ownership of the documents. They include an outline of a Vietnam War speech by King, notes to a speech King never got to deliver in Memphis, Tenn., and a condolence letter from President Lyndon B. Johnson to King's wife after the civil rights leader's 1968 assassination.

In his lawsuit, Belafonte said all of those items had been in his possession for years, given to him by King, his wife, or close connections of the couple.

Belafonte's lawyer didn't return repeated messages from the AP seeking comment or an interview with Belafonte, and a representative of Belafonte Enterprises said he would have no comment.

Young highlighted the yearslong connection between Belafonte and the Kings: “When Martin was killed, the only money that Coretta had was money from an insurance policy that Harry Belafonte had paid out,” he said.

Belafonte and Young are not alone in going up against the King estate in court. In 1987, Coretta Scott King sued Boston University and lost over papers her husband had given to the school where he earned his doctorate.

In 2011, the estate filed a federal lawsuit in Jackson, Miss., against the son of Maude Ballou, who was King's secretary in the late 1950s, over documents including letters from King. They lost, and those documents were put up for auction by Ballou last month.

The three surviving King children - eldest sibling Yolanda died in 2007 - have also sued each other. In 2008, Bernice King and Martin Luther King III sued Dexter King, accusing him of acting improperly as head of their father's estate. The three reached a settlement in October 2009.

The legal actions have brought the King children criticism from some corners. But Young isn't among those voices.

“Whenever I hear people criticize them, I say, remember, none of them were even teenagers when their father was killed and they've done pretty good,” Young said. “It's almost impossible for anyone to live up to that name.”