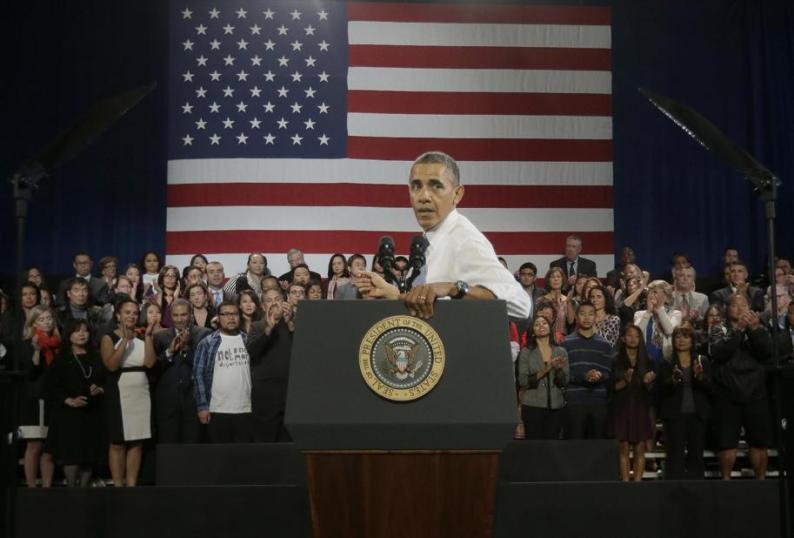 Obama insists that the nation's laws limit his ability to act unilaterally, even though his administration acted on its own last year to suspend deportations of some immigrants brought illegally into the country as children and more recently decided some relatives of U.S. service members living here illegally could remain.

The administration has also quietly changed the rules for immigrants from Visa Waiver Program countries, people who arrived in the U.S. legally but stayed longer than the 90 days the program allows. Now people from the 37, mostly European, countries in the program who are immediate relatives of U.S. citizens can apply to stay in the United States legally.

The moves stand in sharp contrast to the actions of Obama's Homeland Security Department, which has deported a record 1.47 million people during the president's nearly five years in office, according to internal Immigration and Customs Enforcement data. Heckling of the president during California appearances Monday underscored the dissatisfaction with the Democratic president, not only over the stalled immigration overhaul but the administration's policies.

“Stop deportations! Stop deportations!” audience members yelled at Obama during a speech in San Francisco that was interrupted by a young man who said his family has been separated for 19 months.

“Executive order” was the rallying cry at a separate Democratic fundraiser Monday. Obama, the former instructor in constitutional law, responded to the criticism with a brief lesson in the nation's rules.

“If, in fact, I could solve all these problems without passing laws in Congress, then I would do so,” Obama told the first group. “But we're also a nation of laws. That's part of our tradition. And so the easy way out is to try to yell and pretend like I can do something by violating our laws.”

House Republican leaders have rejected the Democratic-controlled Senate's comprehensive immigration bill, which passed on a bipartisan vote in June. The far-reaching measure would provide new visa and workplace enforcement programs and billions of dollars for border security, along with a path to citizenship for millions.

Small, stand-alone bills from the House Judiciary Committee have languished for months, and leaders signaled that votes are unlikely in this year's remaining legislative days even though Obama recently embraced the piecemeal approach. Prospects for immigration legislation in 2014, with congressional elections looming, are slim despite the issue's political drag on the GOP.

Advocacy groups have been as loud as the California protesters in calling for Obama to act while they maintain pressure on House Republicans with protests and acts of civil disobedience.

“House Republicans are infuriating, and legislation is the permanent solution, and we're going to keep fighting for legislation. But that doesn't let Obama off the hook,” Frank Sharry, executive director of America's Voice, a pro-immigrant group, said Tuesday. “He continues to be the president who presides over record deportation.”

What angers the advocacy groups is that many of those deported are immigrants who would qualify for legal status or citizenship under the Senate-passed legislation, which Obama supports.

The organizations argue that Obama could expand his Deferred Action for Childhood Arrivals program, which dealt with some of the children brought illegally into the country, to their parents. He also could delay action against workers who have helped in the prosecution of employers who have broken the law or immigrants who don't represent a threat to national security, the groups say.

“The president does have the authority and the ability to ease the crisis on the ground while the legislative process continues to play out,” Ana Avendano, director of immigration and community action at the AFL-CIO, said in an interview.

Advocates point to a June 2011 memo from Immigration and Customs Enforcement that provided guidance on using prosecutorial discretion in carrying out the nation's immigration laws. The discretion applied to a range of steps that could be taken in enforcing the laws, such as deciding whom to stop and arrest, or whom to release, and applied to officers, agents and lawyers.

“Prosecutorial discretion is the authority of an agency charged with enforcing a law to decide to what degree to enforce the law against a particular individual,” the memo said.

Advocates contend that the memo gave agents, officers and lawyers flexibility in pursuing immigrants living here illegally, with priority given to criminals. But the Obama administration, they say, continues to strictly implement deportations.

About 370,000 people were removed last year, down from more than 409,000 people last year. The Homeland Security Department received money to remove about 400,000 a year, but the government decides who those people are. Hirsoshi Motomura, a law professor and immigration law expert at UCLA, said Obama could decide, for instance, to provide deferred action to groups of people described as low priorities in previous discretion memos issued by former ICE Director John Morton.

Pablo Alvarado, executive director of the National Day Laborer Organizing Network, said in a statement that Obama has a “credibility gap” on immigration, imploring Congress to pass legislation while his administration implements its deportation policy.

“The president can do more, and he knows it,” Alvarado said.

Traveling with Obama in California, a White House spokesman, Josh Earnest, did not rule out some sort of executive action. That possibility unnerves Republicans who point to Obama's unilateral changes to the health care law, such as delaying some requirements and enrollment deadlines.