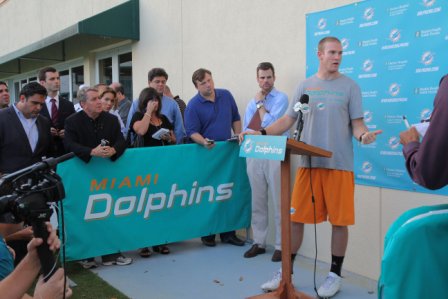 Suspended NFL player Richie Incognito said his alleged bullying of Miami Dolphin teammate Jonathan Martin is misunderstood because "people don't know how Jon and I communicate to one another."

Incognito acknowledged in an interview aired on "Fox NFL Sunday" that he used racist and vulgar language in voice mails and text messages to Martin but said it was "coming from a place of love."

"No matter how bad and how vulgar it sounds, that's how we communicate," he told Fox Sports reporter Jay Glazer. "That's how our friendship was."

"For instance, a week before this went down, Jonathan Martin text me on my phone 'I will murder your whole F-ing family,'" Incognito told Glazer. "Now, do I think Jonathan Martin was going to murder my family? Not one bit."

Martin, 24, left the team last month because of "harassment that went far beyond the traditional locker room hazing," Martin's lawyer said. Days later, the Dolphins suspended Incognito, 30, for conduct detrimental to the team.

After the interview, which was recorded in Los Angeles on Saturday, Incognito let Glazer review his phone text messages with Martin. He counted 1,142 messages exchanged between the two men over the last year, Glazer reported.

"To say that it's offensive, absolutely," Glazer said.

Martin sent Incognito text messages three days after he left the team, Glazer said. One said, "Wassup man? The world's gone crazy lol I'm good tho congrats on the win" and another read, "Yeah I'm good man. It's insane bro but just know I don't blame you guys at all it's just the culture around football and the locker room got to me a little," Glazer reported.

Glazer acknowledged at the beginning of Sunday's broadcast that he has been a close friend of Incognito for five years, including training him in mixed martial arts in the off season.

He said the only issue that Incognito "sidestepped and wouldn't answer" concerned the allegation that Miami coaches had ordered a "code red" instructing the veteran to "toughen up" the younger Martin. Incognito cited "legal issues" preventing him from answering, Glazer said.

Lawyer: Martin made "a difficult choice"

While Martin has not spoken publicly since the controversy erupted, his attorney David Cornwell broke the silence on his behalf with a prepared statement last week.

Martin tried "to befriend ... teammates who subjected him to the abuse with the hope that doing so would end the harassment" -- something that Cornwell called "a textbook reaction of victims of bullying."

The taunting did not stop, however, the lawyer said. He cited "a malicious physical attack on him by a teammate and daily vulgar comments," and a threat of a group sexual assault against Martin's sister.

"Eventually, Jonathan made a difficult choice," Cornwell said of Martin leaving the Dolphins. "... Jonathan looks forward to getting back to playing football. In the meantime, he will cooperate fully with the NFL investigation."

Although Incognito was the Dolphin player suspended, Cornwell's statement alleged others mistreated Martin.

"Right, wrong or indifferent, because of all this, you've become the face of bullying in America," Glazer told Incognito. "Someone thinks of a bully, they think of Richie Incognito."

"This isn't an issue about bullying," Incognito said. "This is an issue of my and Jon's relationship, where I've taken stuff too far and I didn't know it was hurting him."

A profanity-filled voice mail from Incognito to Martin that has been made public was intended to shock him so "his buddy" would call him back, he said.

"When the words are put in the context, I understand why a lot of eye brows get raised," Incognito said. "When people don't know how Jon and I communicate to one another."

Incognito: "I'm not a racist"

He acknowledged using the n-word in his communications with Martin, who is African-American.

"I'm not a racist and to judge me by that one word is wrong," Incognito said. "It, in no way, shape or form, is ever acceptable for me to use that word, even if it's friend to friend in a voice mail." He said "it was a joke."

The word is "thrown around a lot" in NFL locker rooms and it's "a word that I've heard Jon use a lot," he said. "There's a lot of colorful words thrown around in the locker room that we don't use in everyday life."

Martin was his "best friend" on the team, Incognito said.

"You can ask anybody in the Miami Dolphins' locker room, who had Jon Martin's back the absolute most, and they'll undoubtedly tell you me," he said.

Incognito said he was "miffed" by "how I missed this and I never saw it coming."

Glazer asked Incognito what he would say to his former teammate today if he were in the room.

"I think I would give him a big hug right now, because we've been through so much and I'd be like 'Dude, what's going on? Why didn't you come to me?'" he said. "If he were to say 'Listen, you took it way too far, you hurt me.' You know, I would just apologize and explain to him exactly what I explained to you. And I would apologize to his family that they took it as malicious. But I never meant it that way."