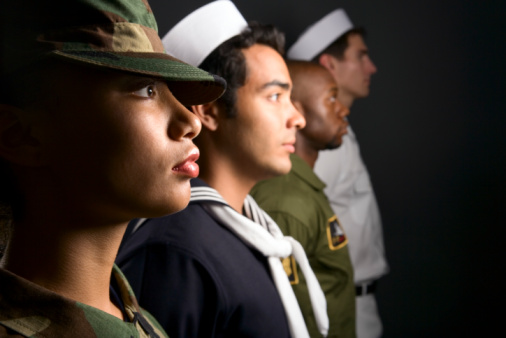 Suddenly, Patrick Caruso's days as a Marine were done.

Like many young men and women who've served their country, Caruso's first weeks back in the civilian world felt "kind of like a shell shock."

The familiar structure of military life was gone, and it was time to adapt to a very different mission: finding a job.

Caruso, now 29, recalled what it felt like when his Marine Corps enlistment ran out in 2007: "I remember having this feeling of, 'I have no idea what I need to do next.'"

Caruso got over that hump and found work. But many young veterans don't, and they end up joining the ranks of America's jobless.

Here are the stats: the overall unemployment rate for veterans in October, the most recent figures available, stood at 6.9 percent. Compare that with the nation's overall jobless rate: 7.3 percent.

But for young vets who served after the 9/11 attacks, the number is higher: 10 percent. That rate peaked at 13.1 percent in December 2011. But today, it still translates into 246,000 post-9/11 vets who were prepared to make the ultimate sacrifice for their country -- and who now are looking for work.

And in some ways, things are getting harder.

That's because a 2-year-old federal program that retrains veterans and offers tax breaks to businesses that hire veterans -- the VOW to Hire Heroes Act -- is set to expire at the end of the year. Also, Congress has slashed a social safety net that provides food stamps to feed more than 900,000 veterans and their families.

Contributing to high veteran jobless rates are issues surrounding the verbal art of communication on both sides of the interview process.

Many who exit the military find new careers in transportation industries such as railroads -- where up to 25 percent of workers are vets -- and aviation and public transit. "They've served our country," said American Public Transit Association President Michael Melaniphy. "It's time for us to step up and be there for them."

Caruso is now one of the newest employees at Denver's Regional Transportation District. As a signal power maintainer, Caruso works on signals and substations across an expanding light-rail transit network. He says he got the position in part because of his skills working on a team that tested amphibious assault vehicles at Camp Pendleton in California.

Caruso's new job gives him a "little bit of a sense of purpose," he says. It's about making sure the "trains get people where they need to go."

Vets make up 23 percent of the metro area's transit workforce. RTD's chief executive officer pushes hard for veterans, partly because he's one himself.

"I am unapologetic about advocating for returning vets and veterans in general," said former Command Sgt. Maj. Phil Washington, who leads RTD after a 24-year Army career. "I've talked to soldiers for the last 10 years about making the transition ... and the transferable thing you bring is leadership."

According to the statistics, younger veterans are having the most challenges finding work after serving. Washington, who enlisted in the Army as a teenager after enduring hardscrabble beginnings in public housing on Chicago's Southside, says he thinks those younger vets ages 18 to 20 are a strong asset to the workforce.

"(They) come in most cases with a can-do attitude that you can mold and shape," Washington said. They come with a background of selfless service, he added, "and I can work with that."

Yet it can be a struggle getting businesses to see the value of young war veterans, and helping those vets understand how to market themselves in the private sector. And that's where Abrams, the Afghanistan war veteran, comes in.

In 2010, when veterans' unemployment was skyrocketing, Abrams started Four Block, a semester-long training and development course for student vets sponsored by City University of New York. The goal was to teach vets how to choose appropriate career paths, network, interview and translate their skills into a new job. The program has taken veterans to networking events at JPMorgan Chase and Goldman Sachs.

"We've worked with about 100 vets and have more than an 80 percent success rate getting them entry-level jobs and internships," said Abrams. Four Block is now looking for support from corporations and nonprofits to expand to other cities.

Abrams offered these tips for vets who are hitting the bricks in search of a civilian job:

1. Don't expect someone to give you a job: "Employers respect and appreciate your service, but that rarely translates into a job offer. You need to communicate how you're able to add value."

2. Network with other veterans: "Veterans represent one of the largest professional networks in the world." Leverage groups such as the American Legion and contact veteran support organizations, says Abrams. Students can use resources such as a university student-veteran center.

3. Practice, practice, practice: "Practice your pitch, refine your resume and go on as many job interviews as you can," says Abrams. "And, do everything you can to get an in-person meeting with potential employers to put your practice to use. Remain flexible with your schedule as face-to-face meetings can be more valuable than a phone call."

4. Utilize technology:  "Like many people on active duty, you've probably used tools like Skype to keep in touch with family back home. Consider using this technology to practice for interviews, as well as making yourself available for interviews with potential employers in other cities. Make sure the room you're in is clean and quiet with lots of natural light.  Put your camera at eye level, and look at the camera, not the screen. Dress to impress, comb your hair and smile."

5. Communicate using civilian terms: "No one will understand that you were an E-4 0311 and served with 3/8 in J-Bad. Learning how to articulate your service in a way that civilian employers will understand is absolutely imperative."