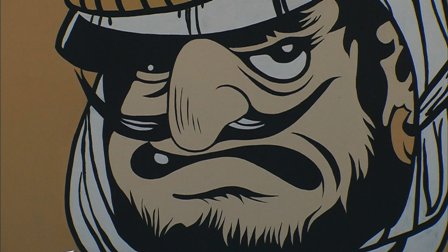 LOS ANGELES (CNN) -- A Southern California high school sports team is not scoring any points for its name, the Arabs.

In a letter this month, the American-Arab Anti-Discrimination Committee accused Coachella Valley High School of stereotyping and demanded a name change.

The group also is seeking a change of the school mascot.

The group said it was "shocked to learn that the Arab" is the official mascot of the high school in Thermal.

The school has a mascot that "depicts a man with a large nose, heavy beard, and wearing" a traditional head covering, the group said.

During halftime, "a female dressed as belly dancer entertains the mascot by dancing for him," it added.

But for the school, the mascot and cheerleaders shouting "Let's go, Arabs, let's go" are nothing new. The mascot dates back to the 1930s.

Coachella Valley Unified School District Superintendent Darryl Adams says he is taking the concerns seriously. He believes his school district and the civil rights group can come to a compromise by altering the mascot's caricature and removing features that insult Arab-Americans.

"It's not so much the name but the depiction of the mascot," Adams said. "I'm from Memphis, Tennessee, so I understand how people can look at different symbols and caricatures. I look at it as an educational opportunity for our students and staff to discuss it.

"Things evolve over time, and it's the 21st Century and it's 2013, and this group feels we need to look at it and we will," Adams said.

The Arab mascot recognizes the influences of the Middle East in the area's date farming, said Rich Ramirez, president of the Coachella Valley High School Alumni Association and a 1959 graduate of the high school.

In the early 1900s, the U.S. Department of Agriculture acquired date shoots from Iraq and other Middle Eastern countries and used them to establish date orchards in the valley's desert climate, Ramirez said.

Some of the valley's Arab-Americans -- largely of Lebanese background -- were involved in date farming, but they mostly ran men's apparel stores and groceries, Ramirez said.

By 1921, the valley held its first date festival in Indio, and people who dressed in Arabian style were admitted free to the festival, he said. The Riverside County Fair and National Date Festival now attracts 300,000 people over 10 days every February, said Ramirez, a former board member of the Coachella Valley History Museum.

Dates became a boon to the valley more than 90 miles east of downtown Los Angeles.

Middle Eastern influences are also reflected in community names of Mecca, Oasis and Arabia. The city of Coachella has street names of Damascus and Baghdad, and the valley's largest city, Indio, has a street named Deglet Noor, a date variety, Ramirez said.

By 1931, the high school adopted the mascot name of Arabs, replacing the informal names of "date pickers" or "farmers" inspired by the area's industry. It was a common way of nicknaming communities then, much like the University of Nebraska Cornhuskers, Ramirez said.

The high school band and drill team dresses in Arab style, and a girl in a genie costume dances during football halftimes, Ramirez said.

Ramirez wants the school to keep the Arab mascot, but he's willing to change the facial features, he said.

"The comment they make is that it has a hook-nose Arab. We have been using the snarling face to instill fear in the opponent. That's what a mascot does. But we can put a handsome dude in the mascot," Ramirez said.

He noted how the community stood up for Arabs shortly after the September 11, 2001, terrorist attacks.

"Work with us. Don't come off like we're something terrible. We're not terrible. When 9/11 came, we got terrible, terrible threats to change the name of our mascot. We said no.

The school district and the national group are meeting to see whether a resolution can be made, the affiliate reported.

The issue will also be discussed at a board meeting November 21. Superintendent Adams will brief the board in closed session on the potential legal implications of the mascot, but he expects there will be many public comments during the open board meeting, he said.

It is unclear whether anything will change before the next game Friday night.