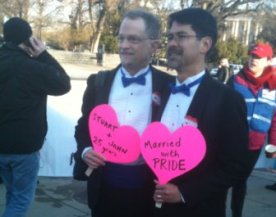 The Senate will take up an anti-discrimination bill to protect lesbian, gay, bisexual and transgender employees from workplace discrimination.

The Senate is set to vote on a key procedural measure Monday afternoon. It's the first time the Senate has moved to take up a comprehensive form of the bill.

The Employment Nondiscrimination Act, also known as ENDA, would provide the same protections for LGBT workers as are already guaranteed on the basis of race, gender and religion. It would no longer be lawful for employers to discriminate based on a person's "actual or perceived" sexual orientation.

Proponents are championing the bill, pressuring opponents or those on the fence to come out in support.

President Barack Obama wrote a rare op-ed in the Huffington Post in which he called job-site LGBT discrimination "offensive" and "wrong."

"And it needs to stop, because in the United States of America, who you are and who you love should never be a fireable offense," the President wrote.

The newest member of the Senate, New Jersey Democrat Cory Booker, who was sworn in last week after a special election, has made a passionate defense of ENDA on one of his oft-used methods of communication.

He said on Twitter he will support ENDA, "Absolutely, unequivocally, proudly with gusto & enthusiasm. I hope to make it my first 'co-sponsor.'"

The measure is coming up for a vote because of a recent wave of momentum in support of it. The bill gained the support of all Democrats and both independents who normally caucus with them, and two Republican co-sponsors: Sens. Mark Kirk of Illinois and Susan Collins of Maine.

Twenty-one states currently have laws on the books protecting lesbian and gay workers from discrimination and 17 states protect transgender workers, according to the Human Rights Campaign. The federal statute would create protections in all states and the District of Columbia.

In his op-ed, the President put pressure on not only the Senate but the House of Representatives as well, where a vote is much more uncertain.

"If more members of Congress step up, we can put an end to this form of discrimination once and for all," Obama wrote.

The Republican-led House might be a major obstacle to ENDA's success.

The conservative political organization Heritage Action put out a notice to all Republican lawmakers recommending a no vote. Its scorecards are threatening assessments of lawmakers who fear a primary challenger or are in need of the outside group's influx of campaign cash.

An exemption for religious organizations is included in the bill, but some want the religious protection extended to secular businesses. Employers with fewer than 15 employees would also be exempted from the law.

Heads of major businesses have come out in support of the law, including Tim Cook, Apple's CEO, who wrote an op-ed Monday in the Wall Street Journal.

"So long as the law remains silent on the workplace rights of gay and lesbian Americans, we as a nation are effectively consenting to discrimination against them," he wrote. "We urge senators to support the Employment Nondiscrimination Act, and we challenge the House of Representatives to bring it to the floor for a vote."