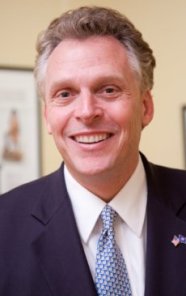 A new poll indicates Democrat Terry McAuliffe maintains his advantage over Republican Ken Cuccinelli, one day before the two candidates square off on Election Day in Virginia's gubernatorial race.

The margin between McAuliffe, a former Democratic National Committee chairman, and Cucinelli, the commonwealth's Attorney General, remains similar to a poll released on Friday that showed McAuliffe with a seven percentage point advantage.

Other surveys in recent weeks have consistently shown McAuliffe slightly ahead of his Republican opponent.

The latest poll was conducted from October 29 through November 3, a window of time that included high profile campaign stops by former President Bill Clinton and President Barack Obama for McAuliffe. Former Secretary of State Hillary Clinton has also hit the trail for McAuliffe, and Vice President Joe Biden attends an event for the Democrat on Monday.

The new poll also indicates five percent of likely voters are undecided, while five percent say they may change their mind by Tuesday.

The latest poll also continues to show that Cuccinelli has struggled to shore up his Republican base as much as McAuliffe.

"All year long, Cuccinelli has suffered from an inability to unite the Republican base, and if today's data holds true for another 24 hours, analysts may look back at his 85 percent of the GOP vote as his fatal flaw, while McAuliffe was getting 93 percent of the Democratic vote," Peter A. Brown, assistant director of the Quinnipiac University Polling Institute, said in a news release about the poll.

Also Monday, Cuccinelli teams up with former Rep. Ron Paul, a three-time presidential candidate who has a strong following among Libertarian voters, at a rally in Richmond. With Sarvis close to 10 percent in the polls, it's no surprise that Cuccinelli is closing his campaign with Paul at his side.

Quinnipiac surveyed 1,606 likely voters by telephone, with a sampling error of plus or minus 2.5 percentage points.