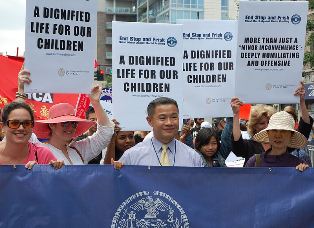 NEW YORK (CNN) -- A federal appeals court Thursday blocked a previous ruling that deemed the NYPD's stop-and-frisk policy unconstitutional, and removed the judge from the case, while other appeals in the case are heard.

The three-judge panel of the U.S. Court of Appeals for the Second District said the lower court judge "ran afoul of the Code of Conduct for United States Judges" that requires judges to avoid impropriety and the appearance of it.

About the judge, Shira A. Scheindlin, the appeals court said "that the appearance of partiality surrounding this litigation was compromised by the District Judge's improper application of the Court's 'related case rule,' ... and by a series of media interviews and public statements purporting to respond publicly to criticism of the District Court."

According to the ruling, Scheindlin, in a related 2007 proceeding, said, "[I]f you got proof of inappropriate racial profiling in a good constitutional case, why don't you bring a lawsuit? You can certainly mark it as related," adding, "I am sure I am going to get in trouble for saying it, for $65 you can bring that lawsuit."

The ruling also points to interviews with the New York Law Journal, The Associated Press and the New Yorker in which the judge spoke about her personal beliefs on the issue, and defended her decision against criticisms by the city.

The appeals panel ordered the case to be assigned to a different judge, who will implement the appeals court's "mandate staying all proceedings and otherwise await further action by the Court of Appeals on the merits of the ongoing appeals," the ruling said.

The stop-and-frisk policy -- in which police stop, question and frisk people they deem suspicious, even if they've committed no crime -- has been one of the most controversial policing techniques in recent time, fueled by clashes between civil rights and civil liberties groups challenging the practice as racist and illegal, and law enforcement and other proponents saying the practice works to reduce crime.

In August, Scheindlin ordered that the stop-and-frisk policy be altered, finding that it is unconstitutional in part by unlawfully targeting blacks and Latinos.

City officials had bristled at the contention that police racially profile suspects, and appealed the ruling.

The panel did not rule on whether Scheindlin's decision reached the correct conclusion.

"In taking these actions, we intimate no view on the substance or merits of the pending appeals," the ruling said.

"We could not be more pleased with the Court's findings," he said, because the ruling puts off a decision on the constitutionality of the policy until another judge can weigh in on the issue.

The non-profit legal advocacy organization litigating against the city on behalf of the plaintiffs in the case against the policy, criticized the ruling.

"We are dismayed that the Court of Appeals saw fit to delay the long-overdue process to remedy the NYPD's unconstitutional stop-and-frisk practices, and we are shocked that they cast aspersions on the professional conduct of one of the most respected members of the federal judiciary and reassigned the case," said the Center for Constitutional Rights in a statement.

"We are shocked that they cast aspersions on the professional conduct of one of the most respected members of the federal judiciary and reassigned the case."

Thursday's ruling effectively stalls changes mandated by Scheindlin, who said stops should be based on reasonable suspicion and in a racially neutral manner. Her ruling called for the appointment of a former chief assistant district attorney in Manhattan to develop and oversee reforms of the NYPD's policies and training and a pilot project in which NYPD patrol officers in five precincts -- one in each borough with the most stops in 2012 -- must wear video cameras.

Outgoing Mayor Michael Bloomberg is an outspoken proponent of the policy, saying it saves lives and lowers crime.

NYPD Commissioner Ray Kelly, was forced to cancel a speech at Brown University on Tuesday after protesters shouted at him on stage about stop-and-frisk policies and racism claims.

Thursday, Kelly said he has been "concerned about the partiality of Judge Scheindlin and we look forward to the examination of this case."

The controversy about the policy extended into the mayoral race.

Democratic nominee Bill de Blasio, who is heavily favored to win the election on Nov. 5, has made his opposition to stop-and-frisk a major issue of his campaign.

"I'm extremely disappointed in today's decision. We shouldn't have to wait for reforms that both keep our communities safe and obey the Constitution," he said in a statement.

Republican nominee Joe Lhota said, "Bravo! As I have said all along, Judge Scheindlin's biased conduct corrupted the case and her decision was not based on the facts."