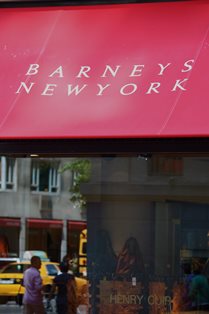 (CNN) -- An African-American college student is suing Barneys New York and the city's police department, saying he was racially profiled and later detained by police, according to court documents filed in Manhattan Supreme Court.

New York City College of Technology student Trayon Christian, who was 18 at the time, entered Barneys New York on Madison Avenue on April 29 to buy a Ferragamo belt he had seen rappers wear on television, Christian's attorney, Michael Palillo, told CNN on Wednesday.

The officers asked Christian for his identification and asked what was in the Barneys bag. When they saw the designer belt, they asked him how he was able to afford it, Palillo said. The officers allegedly accused him of purchasing the belt with a fraudulent card and said they had received a call from Barneys, according to Palillo.

In a prepared statement, a Barneys representative said that Barneys New York "typically does not comment on pending litigation."

The representative said that in this instance, the company felt compelled to say "that after carefully reviewing the incident of last April, it is clear that no employee of Barneys New York was involved in the pursuit of any action with the individual other than the sale. Barneys New York has zero tolerance for any form of discrimination and we stand by our long history in support of all human rights."

The two officers handcuffed Christian on the sidewalk and placed him into a police vehicle, according to the court documents filed Monday. Christian was detained in a holding cell for two hours and interrogated, as police contacted Chase Bank to check his card, Palillo said.

When they confirmed that his card was valid, police released Christian and apologized, Palillo said.

The New York Police Department did not respond immediately to a request for comment.

Palillo said this is a clear case of racial profiling by the department store and police.

"This is an outrage. He committed no crime," he said. "He's a young black male who likes fashion."

Palillo recently received a call from another man who said he experienced a similar incident at Barneys -- an injustice that appears to happen too often, Palillo said.

"You really hate to think that in today's day and age that people are still being judged by the color of their skin," he said.