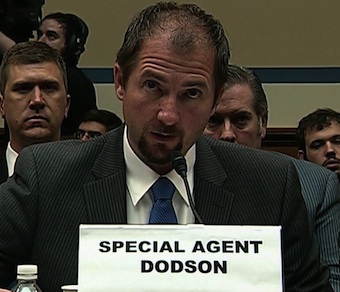 A federal agent will be allowed to write a book with an insider's account of Operation Fast and Furious, reversing an earlier government attempt to block publication for "morale" reasons. However, John Dodson, an agent with the Bureau of Alcohol, Tobacco, Firearms and Explosives, won't be allowed to make money on the book.

A U.S. law enforcement official familiar with the matter says the Justice Department, ATF and the Federal Bureau of Investigation will review Dodson's manuscript and, after making redactions to protect sensitive law enforcement information, will clear it for publication. However, federal employee guidelines prohibit Dodson and other active agents from making a profit from their work in law enforcement, the official said.

Dodson was among several agents who claimed whistle-blower status to provide information to Congress about the controversial Fast and Furious operation. The operation run by ATF agents in Phoenix allowed suspected smugglers to buy about 2,000 firearms in 2009-10. Their plan was to use the gun sales to try to prosecute major arms traffickers. However, agents had no way to track the weapons, and hundreds wound up in the hands of drug cartels. Two Fast and Furious guns were recovered at the scene of a border agent's slaying in 2010 near the Mexican border, although it isn't clear whether they were used to kill him.

Dodson has enlisted the help of the American Civil Liberties Union, which last week warned the ATF that denying permission to publish his manuscript violated his First Amendment rights. The ACLU urged the ATF to change its regulations that allow supervisors to block publication for any reason.

Dodson's supervisors in the ATF's Phoenix office earlier rejected his request to seek a publisher for his book in part because they said it would have "a negative impact on morale," and "a detremental effect (sic) on (ATF) relationships" with other agencies, the FBI and the Drug Enforcement Administration.

The Fast and Furious operation gave rise to more than a year of political controversy for the Justice Department, and eventually prompted House Republicans to sanction Attorney General Eric Holder for contempt of Congress in a legal dispute over the White House's refusal to turn over documents. Holder has said tactics used in "Fast and Furious" never should have been allowed.

Dodson said he suffered retaliation after providing testimony to Congress. Justice Department documents released in the congressional investigation showed that Dodson sought permission from supervisors to use some of the same tactics he later criticized in Fast and Furious. Dodson told congressional investigators he did so assuming that his request would be rejected and that then he could point out the problems in Fast and Furious. Instead, his request was approved.

After Dodson last week complained about his book being blocked, ATF officials acknowledged that his supervisors had noted morale as one reason. However, the agency said the rejection was "not about 1st Amendment rights. This is about a current employee trying to profit financially from knowledge he has gained while currently employed as a special agent."

The ATF cited federal ethics rules that state: "An employee, including a special Government employee, shall not receive compensation from any source other than the Government for teaching, speaking or writing that relates to the employee's official duties."