Video No Compromise to End Shutdown in Sight 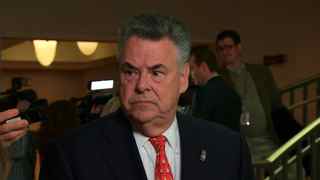 (CNN) -- Moderate Republican Rep. Peter King said Sunday there's "no way" enough House Republicans will side with Democrats on passing a "clean" continuing resolution to fund the government and end the shutdown crisis. A "clean" resolution would be one that has no language that makes changes to Obamacare.

The idea came up Saturday, when House Democratic Leader Nancy Pelosi announced that 195 House Democrats signed their names to a letter saying they'll support a resolution in line with a budget that has received support from some House Republicans.


If House Speaker John Boehner put the resolution to a vote, Democrats would need about two dozen more votes from Republicans to reach a two-thirds majority.

But King said that strategy just isn't going to fly.

"It's not going to go anywhere because the Democrats are not bargaining in good faith. There's no way in the world you're going to get 25 Republicans to go on that," King said on "Fox News Sunday."

King initially did try to form a small coalition of moderate Republicans to side with Democrats and avoid a government shutdown, but he wasn't able to garner enough members.

The biggest problem, King said, is not just that the government is shut down, but that Republicans haven't had a strategy for bringing about positive results following the funding lapse.

As the shutdown drags into a sixth day, and the nation creeps ever closer to an October 17 debt ceiling deadline, there's no sign of Democrats and Republicans coming to any sort of agreement on either matter.