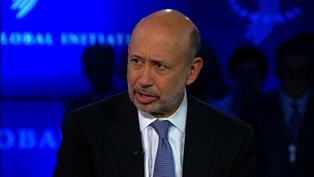 WASHINGTON (CNNMoney) -- Wall Street CEOs will head to the White House to meet with President Obama on Wednesday, according to sources.

Goldman Sach's Lloyd Blankfein will be among the group of CEOs meeting with the president in a visit organized by the Financial Services Forum, a trade group which represents bank chiefs, according to three sources familiar with the schedule.

The meeting was originally organized as part of the Obama Administration's ongoing efforts to mend relations with the financial services sector and woo their support for White House policy.

Given the meeting is happening in the midst of a government shutdown, one source suggested the shutdown and budget will likely be a major focus of the meeting.

Blankfein told CNN's Fareed Zakaria last week that the stalemate in Congress and the fear of the U.S. government defaulting on its debts is "making people insecure" and has "adverse consequences" which will "reverberate" in the markets.