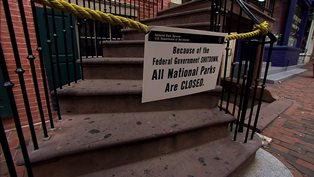 NEW YORK (CNNMoney) -- A government shutdown could cost the still-struggling U.S. economy roughly $1 billion a week in pay lost by furloughed federal workers. And that's only the tip of the iceberg.

First, there are the estimated 800,000 federal employees who will be off the job. That's roughly the same number of workers employed by all the auto assembly lines and auto parts factories across the country.

But economists say the impact will come not just from those lost wages, but also from related businesses cutting back or halting their operations. That will lead to a pullback in spending by employees of affected companies.

Then, there's the impact from increased business uncertainty that trims investments and disrupts financial markets.

The total economic impact is likely to be at least 10 times greater than the simple calculation of wages lost by federal workers, said Brian Kessler, economist with Moody's Analytics. His firm estimates that a three to four week shutdown will cost the economy about $55 billion.

That would mean that the economic impact from a month-long shutdown would be roughly equal to the combined disruption caused by Hurricane Katrina and Superstorm Sandy, not counting the property damage that accompanied those storms.

"What's maddening is this is all totally voluntary. It's totally unnecessary," said Kessler.

Yet Kessler said there are still hopes that the economy can be spared the worst of the impact.

"If it's a relatively short shutdown, it's a minor headache," he said. "But if it lasts several weeks, the people affected start to act like they're unemployed. They delay larger purchases. That's why you start to see a significantly greater effect the longer it goes ."

"The private sector impacts are quite large," Kessler said.

A government shutdown will also have less-obvious effects.

A shutdown also will hurt small businesses, since the Small Business Administration also won't be able to process loan applications. Tourism and even air travel could be affected since the state department won't be able to issue visas to allow many foreign travelers to come here.

But the real worry for economists is not what happens because of a government shutdown. The real worry is if the current legislative battle prevents the debt ceiling from being raised before Treasury runs out of cash to pay the nation's bills.

"A protracted shutdown would cause larger, escalating disruptions, including declines in private production and rising risk premiums in financial markets," said a note from Macroeconomic Advisors. "However, we see the possibility of hitting the debt ceiling later this fall as a far larger threat to the economic outlook."

Mark Zandi, chief economist for Moody's Analytics, testified before Congress last week that while a shutdown would slow economic growth, breaching the debt ceiling would force far deeper spending cuts that would quickly plunge the U.S. economy back into recession.