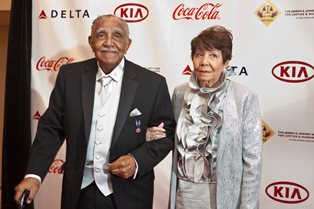 (CNN) -- Civil rights activist Evelyn Gibson Lowery, who with her husband, the Rev. Joseph Lowery, participated in the 1965 Selma-to-Montgomery march in Alabama, died Thursday morning at her Atlanta home, a family spokeswoman said.

She suffered a stroke last week, and on Wednesday returned home from a hospital after medical personnel decided "there was nothing more medically that they could do," the Lowery family said in a statement released Thursday.

"My beloved Evelyn was a special woman, whose life was committed to service, especially around the issues of empowering women," Joseph Lowery said. "She was a wonderful mother and wife and I thank God that she didn't suffer any pain and that I was blessed having her as my partner, my confidante and my best friend for close to 70 years.

"I will miss her each and every day, but as a man of faith, I know that she is with her God. My entire family has been overwhelmed by the continuous outpourings of love, support and prayers that have come from across the country and we ask for your continued prayers over the next few days."

Pioneers of the civil rights movement

The Lowerys' participation in the Selma-to-Montgomery march supporting African-Americans' right to vote was just one aspect of the couple's historic lives.

They were among the pioneers of the American civil rights movement from its beginnings in the 1950s.

Joseph Lowery -- sometimes referred to as the "dean of the civil rights movement" -- was a founder of the Southern Christian Leadership Conference, the civil rights group formed in 1957. Martin Luther King Jr. was the first president of the group.

The purpose of the group, according to a bio on her group's website, is to "champion the rights of women, children, families, and responding to the problems of the disenfranchised regardless of ethnicity, gender, age, or religion."

In the 1980s, she founded several prominent programs, according to the profile.

One is the Drum Major for Justice Awards Dinner, which honors people who made contributions in the arena of social justice. Another is The Evelyn G. Lowery Civil Rights Heritage Tour that honors icons of the civil rights movement. She is responsible for the establishment of monuments honoring those icons.

She founded the Women's Empowerment Training Center for GED/computer training in 1988 and a mentoring program for girls in1995.

Lowery was the daughter of a clergyman in Memphis, Tennessee, who served in the local NAACP.

"Young Evelyn's eyes were exposed to the injustices (in) society, and before the age of eighteen, she committed herself to working towards making those conditions better," the website bio said.

CNN's Tenisha Bell and Jason Hanna contributed to this report.