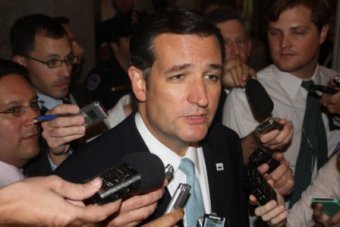 WASHINGTON (CNN) -- He read the children's book "Green Eggs and Ham," impersonated Darth Vader and recited a detailed history of risks faced by the 56 signers of the Declaration of Independence.

More than 21 hours after he started, Republican Sen. Ted Cruz of Texas on Wednesday finally ended his oral assault on Obamacare -- an all-night blend of political rhetoric and emotional pleas for all of his GOP colleagues to join him in blocking any government funding for the health care reforms.

Cruz and other tea party conservatives want to prevent the Senate from taking up the spending measure passed last week by the GOP-controlled House that makes continued government funding contingent on cutting all money for Obamacare.

The Democratic-controlled Senate plans to restore funding for the health care reforms that were established under the signature legislation of President Barack Obama's first term -- the Affordable Care Act passed in 2010 and upheld by the Supreme Court last year.

Cruz's remarks did not constitute a filibuster and won't block a key procedural Senate vote scheduled for 1 p.m. ET on Wednesday that will begin moving the measure through the chamber's procedural labyrinth.

He lacks support for his tactics from Senate Republican leader Mitch McConnell of Kentucky and other influential veterans including Sens. John McCain of Arizona and Bob Corker of Tennessee.

Senate Majority Leader Harry Reid called Cruz's all-night speech a "waste of time" as the nation faced a possible partial shutdown of the government if Congress fails to authorize government spending beyond Monday.

To Reid, the tactic reflected what he described as a perspective that a "bad day for government" amounted to a "good day" for tea party conservatives.

McConnell followed Reid by praising Cruz for raising attention to the problems of Obamacare, even if he has undermined the Texas senator's strategy by publicly announcing he would vote to overcome a filibuster against taking up the House measure.

Earlier Wednesday, Corker told CNN that a better idea would be to get the bill back to the House as soon as possible so the Republican majority there can offer a compromise.

"House members are already talking about how they might respond if the defunding component ends up being stripped out," Corker said, adding he hoped that the Senate would "give the House some time to respond in a thoughtful way."

With Obamacare's markets for the uninsured set to open on October 1, which also begins the new fiscal year, a possible GOP counter-proposal floated by Corker would delay it for a year. He noted that Obama already put off another component affecting business implementation of health care reforms for a year.

Under the process planned by Senate Majority Leader Harry Reid of Nevada, a final Senate vote on the revised spending plan would occur over the weekend to leave the House a day at most to reconsider it.

Cruz, as he approached the 21-hour mark, proposed holding the initial procedural vote on Wednesday as already planned by Reid, and he pushed for a final vote as soon as Friday so that it would get more news coverage than during weekend football games.

"I thank the men and women who have endured this Bataan death march," he said in starting his conclusion.

Cruz filled the hours of his Senate speech with a blend of political rhetoric and emotional pleas for Republicans like Corker to unite in opposition to Obamacare.

Conservative colleagues including Sen. Mike Lee of Utah, Marco Rubio of Florida, David Vitter of Louisiana and James Inhofe of Oklahoma joined him at times to assume the main talking duties and allow Cruz to rest his vocal chords.

As he reached 18 hours of holding the Senate floor, Cruz compared his anti-Obamacare effort to the "Star Wars" films.

Referring to having heard someone use the phrase "rebellion against oppression," Cruz said those words "conjured up to me the rebel alliance fighting against the empire. The empire being the Washington, D.C., establishment."

"And indeed immediately on hearing that phrase I wondered if at some point we would see a tall gentleman in a mechanical breathing apparatus come forward and say in a deep voice, `Mike Lee, I am your father.' "

Cruz also called for Senate Republicans to show the same courage as their party colleagues in the House in making a stand to defund Obamacare. He alluded to the risks faced by the signers of the Declaration of Independence, noting they were mostly wealthy landowners who faced hanging for treason for their actions.

When he began at 2:40 p.m. on Tuesday, Cruz said he intended to "speak in support of defunding Obamacare until I am no longer able to stand."

'Green Eggs and Ham' gets a reading

On Tuesday night, he read the Dr. Seuss children's classic "Green Eggs and Ham" to his daughters.

At 9 a.m. Wednesday, Cruz was alone on the floor, except for the presiding officer, Democratic Sen. Dick Durbin. There were no spectators in the general public's area of the balcony.

Durbin and Cruz engaged in some hostile exchanges, with the Illinois Democrat accusing Cruz of trying to deny health care coverage for tens of millions of currently uninsured Americans while enjoying the benefits of a federal health care program.

Cruz responded that Obamacare was flawed and hurting the country, and the focus should be on a better solution instead of continuing on with a failed system.

Two sides battle it out on social media

Firing a warning shot at his fellow Senate Republicans, Cruz told CNN's Dana Bash on Monday, "Any senator who votes (to move forward with debate on the House bill) is voting to give Harry Reid the authority to fund Obamacare."

Supporters cheered him on through social media, and #StandWithCruz became one of the most popular hashtags on Twitter.

But supporters of the health care law made themselves heard as well. On Wednesday morning, the two sides were battling it out in the top trending topic in the United States: "Obamacare."

Cruz also has been the target of criticism by some top Republicans.

"I don't think that filibustering a bill that defunds Obamacare is the best route to defunding Obamacare," McConnell said on the Senate floor. "All it does is shut down the government and keep Obamacare funded, and none of us want that."

Cruz's GOP critics believe his strategy is politically suicidal, arguing there is no way to stop Obamacare as long as Democrats maintain control of the Senate and Obama is in the White House.

They believe that trying to do so by forcing a shutdown -- or preventing an increase in the debt ceiling next month -- will backfire by harming the economy and damaging the Republican brand.

Some Republicans, such as McConnell, would at least like the opportunity to force vulnerable Democrats to cast a politically tough vote on the House plan.

It remains to be seen how much pressure Cruz and his tea party backers will ultimately put on other Republicans. McConnell is up for re-election in 2014, and his conservative GOP primary challenger wasted no time Tuesday blasting the minority leader for opposing Cruz's stance.

"Like so many other crucial fights, Mitch McConnell has caved to Harry Reid on Obamacare and is refusing to fight to defund this disastrous legislation," Matt Bevin said.

"I am proud to support conservatives like Sen. Ted Cruz in his fight to defund Obamacare, and I promise the people of Kentucky: I will never cave to Harry Reid."

For his part, Reid argued on the Senate floor that "just as the economy begins to gain steam, some Republicans in Congress seem determined to derail four years of progress."

"They're obsessed with defunding health care," he said. "They're pushing us closer and closer to a government shutdown that would tank the economy."