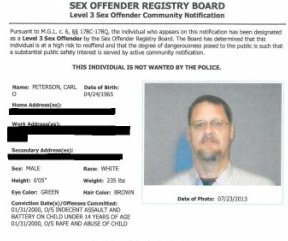 At a public meeting held Thursday to discuss the status of a new sex offender in the community of Belmont, Massachusetts, the man in question came forward to address his neighbors -- and say that educating children is the only way to keep them safe.

"My name is Carl Peterson. I'm the Level 3 sex offender all of you have been talking about," Peterson reportedly said to the auditorium of parents gathered for the meeting at Belmont High School.

The Belmont Police Department organized the meeting after receiving a number of inquiries from concerned residents. Police say no one was aware that Peterson, 48, was going to address the crowd.

"Some people were confused. We had the meeting to get information out to the public, and he decided to come," Belmont Assistant Police Chief James MacIsaac told HLN. "It wasn't for his purpose."

In Massachusetts, Level 3 sex offenders are considered high risk. Most have prior sex crime convictions, predatory characteristics and may be violent, according to the Massachusetts Department of Public Safety. According to court documents, Peterson was charged and sentenced to four years in prison for rape and gross sexual imposition. He moved to Belmont in late July with his wife and daughter, according to the Belmont Patch. The online newspaper wickedlocal.com reports that Peterson is recently married and the girl is not his biological daughter.

"I'm a parent. I have a 14-year-old daughter," Peterson said at the meeting, according to Belmont Patch. "On the first day of school, a white SUV showed up and approached a child. I'm a Level 3 sex offender; it scared me to death. We talked about this to our daughter. ... What happened is the kid did not get picked up. He knew exactly what to do. The kid said 'This is not OK' and went away and told the police. There's not much else (parents) can do except (talk to their own children) about being safe."

The meeting agenda listed a number of professionals who were there to address the public's concerns, including police officers, a member of the sex offender registry board and a representative from the district attorney's office.

"Tonight's meeting is intended to be educational. This is an opportunity for you to have all your questions concerning sex offenders answered by professionals," MacIsaac wrote in a flier distributed at the meeting. "The meeting tonight is not intended to create alarm, but rather to inform the community. It is the belief of law enforcement that an informed public is a safe public."

Once the speakers were done with their presentations, they took questions from the audience. That's when Peterson spoke up.

"The problem is all you know, all you get to know about my problem is what you read ... which says I'm the most dangerous and the most likely to reoffend of all sex offenders. It also says my offense was the rape against a child," the Belmont Patch quoted Peterson as saying.

A mother at the meeting, who asked to not be identified, told HLN Peterson was interrupted by a woman yelling, "I don't want to hear it!" But another member of the community urged him to continue and other parents agreed.

"I wanted to know, too," the mother said. "I was physically sick to my stomach while he was speaking. It was really evil."

She also said Peterson generally described what he did to his niece.

"He said he touched her with his hand. He was trying to say he didn't rape her. He made a number of mentions as if it wasn't really rape. One because it was someone he knew. As if that made it not rape. And he kept trying to tell us it's not so bad -- so typical of a criminal," the mother said.

Debra Crabtree, another parent who attended the meeting, said she also felt that Peterson "convinced himself that what he did wasn't that bad."

"I honestly didn't believe anything that he said," Crabtree told HLN. "I felt like he got up in front of a group of people and was trying to gain sympathy and trust."

Peterson's therapist, Dr. Carol Ball, and his pastor, Steve Watson, also accompanied him to the meeting and answered a few questions.

"Some people thought it was courageous and brave. Others were mortified. He was very calm and pretty well spoken," Crabtree said.

As a result of the meeting, a new policy was put in place that requires police to inform the community of a new sex offender in the area two days after they register.

"We haven't had a Level 3 since 2006, and a lot of people were caught off guard," MacIsaac said. "It's a unique situation. ... He has a connection with someone at the school."

That connection, according to local reports, is Peterson's daughter, who attends Belmont High.

According to online newspaper Wickedlocal.com, the superintendent made an agreement with Peterson to allow him on school property while accompanied by another adult.

HLN has reached out to interim Superintendent Thomas Kingston for a response, but calls have not been returned. Attempts were also made to reach Peterson, but they were unsuccessful.

Assistant police chief MacIsaac said he empathizes with others in the community who are worried about their kids' safety. "As a parent with three kids in the town, what concerns me most is what I don't know," he said. "But we know where he is and who he is."

Peterson attempted to address parents' concerns at the meeting. "One thing I can say is I will answer any questions you have ever," he said. "My crime was not against pre-school children or somebody I didn't know or lots of lots of children. It was against my niece."