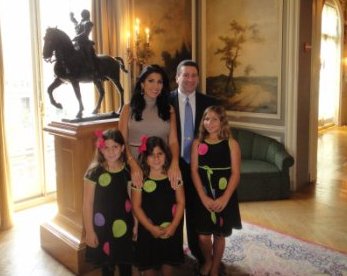 The Justice Department is seeking dismissal of a lawsuit by the Tampa, Florida, socialite whose complaints about threatening and anonymous e-mails set off a chain of events resulting in the resignation of CIA director David Petraeus.

Jill Kelley and her husband Dr. Scott Kelley filed suit in June against the FBI, Pentagon and unnamed federal agents for allegedly violating her privacy and accessing private e-mails against their wishes. The Kelleys claim government officials wrongfully disclosed Jill Kelley's name to the news media.

Late Tuesday, the government asked that the lawsuit be dismissed because it failed to present any facts to show the FBI, Defense Department and others had violated Jill Kelley's rights.

Former Gen.John Allen, commander of U.S. Central Command, was the first to receive an e-mail in June 2012 from a mysterious sender which referenced Kelley's social activities.

Petraeus resigned in November 2012 after having admitted to carrying out an extramarital affair -- with Broadwell.

During the scandal, it also came to light that Kelley and Gen. Allen engaged in e-mail conversations which anonymous officials suggested were inappropriate.

The Kelleys said Jill Kelley and Allen were friends and not romantically involved and claimed such suggestions exposed her to ridicule. A Pentagon investigation cleared Allen of wrongdoing; he retired from the military in February.

Alan Raul, an attorney representing the Kelleys, said they will continue to press their case "so that justice can be done, and that other citizens may feel safe in coming forward to the government with evidence of crimes."

Raul said the Justice Department's filing didn't refute the claim that government sources leaked Kelley's name and the reputations of Kelley and her husband were damaged.