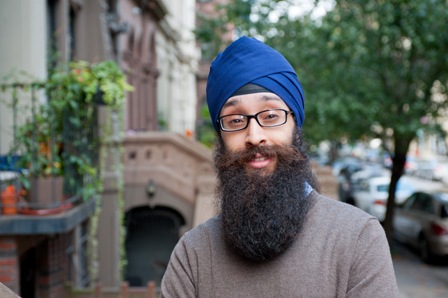 NEW YORK (CNN) -- A Columbia University professor who wrote about hate crimes against Sikhs may have become a victim of one himself when 12 to 15 people attacked him while shouting anti-Muslim slurs, police said.

Prabhjot Singh, a Sikh and a professor of international and public affairs, said the attackers were yelling "get Osama" and "terrorist" when they swarmed him Saturday night near Central Park in New York.

"There were about 20 of them. A few surrounded me, and started punching me," Singh said, according to the Sikh Coalition.

He suffered injuries to his face, including displaced teeth and a possible fracture in his lower jaw, as well as severe bruising and a small puncture on his elbow, the coalition said. Singh was treated and released from Mount Sinai hospital.

The New York Police Department said it is investigating the incident as a hate crime.

"This is a tremendous blow not just to Prabhjot and Sikh Americans, but to the ideals of all New Yorkers," said Amardeep Singh, program director of the Sikh Coalition. "What happened did not happen in a vacuum. Here in New York City, we regularly receive reports that Sikh school children are called 'Bin Laden' or 'terrorist' by classmates and sometimes endure physical violence."

The professor co-wrote a 2012 op-ed for The New York Times, saying "the legacy of anti-Sikh violence and its contemporary prevalence make it painfully obvious that anti-Sikh violence is often purposeful and targeted." He called for the government to start tracking hate violence against Sikhs specifically, instead of categorizing such instances as anti-Islamic hate crimes like the FBI generally does.

The United States is home to about 700,000 Sikhs, nearly all of Indian origin. The men often wear beards and turbans, a tradition that's lasted for 500 years.

But the attire and appearance have also meant that they are often mistaken for Muslims, and Sikhs have become targets of anti-Islam attacks.

Since 9/11, the Sikh Coalition reported more than 700 attacks or bias-related incidents against Sikhs, including the fatal shooting of six people at a Sikh temple last year outside Milwaukee, Wisc.

The coalition also cited beatings of Sikhs across the country after the victims were taunted about their turbans or subjected to racial slurs.

Sikhism, the world's fifth most popular religion, is a monotheistic faith that believes in equality and service to others, Sikh officials say.