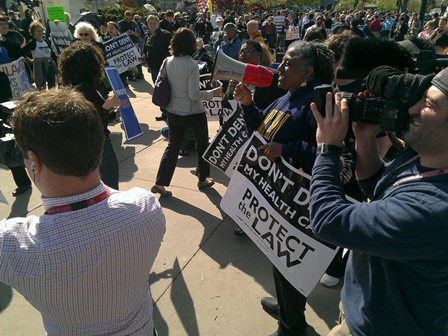 Congress always works on two tracks. The first rail is legislation that gives the government authority to spend money. The second rail is one that actually appropriates the funds. It's that second law that dictates how the government can spend dollars for the Indian Health Service (or any other program) under parameters set by law.

This two-track idea is important to remember when you think about the chaos in Washington concerning the budget and debt ceiling. Certain hardline Republicans and Tea Party members, known as True Believers, are bent on using the budget process to rewrite the Affordable Care Act -- and that proposal would be catastrophic for the Indian health system.

The proposal to defund the Affordable Care Act would wipe out most of the Indian Health Service budget. This scenario is beyond absurd: Imagine every Indian Health Service, tribal, nonprofit, or urban clinic unable to open its doors after October 1 and remain closed for a full year.

That's exactly what House Joint Resolution 62 would do. The resolution, promoted by Georgia Republican Tom Graves, would fund the government at sequester levels, while eliminating any money that implements the Affordable Care Act.

Normally this proposal wouldn't be worth mentioning. It has some sixty supporters in the House and a few members in the Senate, so it's not a majority view. But this also shows how Congress is drifting toward a more conservative stance. The Heritage Foundation, for example, is providing "research" on the viability of defunding the Affordable Care Act. Heritage said: "It is beyond dispute that Congress can use its power of the purse to defund ObamaCare—both its mandatory and discretionary spending— in appropriations legislation this fall. The lone remaining question is whether Congress can summon the political will to do so."

Republicans who support this defunding approach appear unwilling to compromise. There is no middle ground for True Believers.

Idaho Republican Raúl Labrador is a good example of the True Believer Thinking. He says he will not vote for a bill that doesn't strike down ObamaCare. "House Leadership should bring it to the floor for a vote," he said in a news release. "If the House passes it and the Senate rejects it, it will be the Senate that's responsible for shutting down the government. Let's hope it doesn't come to that, but House Republicans must seize this opportunity to keep our promises to the American people on ObamaCare."

The thinking from the True Believers -- such as Labrador -- is that the public would blame the president for "shutting down" government because everyone understands that neither the Senate nor President Obama would agree to such a destructive approach. (And, at some point, as I wrote last week, Republican leaders might just have to work with Democrats in the House to head off a government shutdown or a debt default.)

But the True Believers don't care. They are willing to sink their own Republican leaders -- and the country -- in order to kill the Affordable Care Act. But do they have the votes? Even in the House? And what happens after that? Hard questions. And we need the answers soon.

Mark Trahant is the 20th Atwood Chair at the University of Alaska Anchorage. He is a journalist, speaker and Twitter poet and is a member of The Shoshone-Bannock Tribes. Join the discussion about austerity. Comment on Facebook at: https://www.facebook.com/IndianCountryAusterity