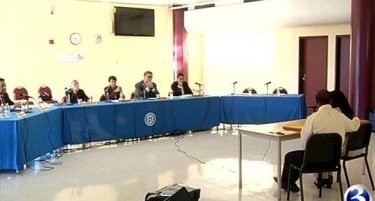 "You're not a person, you're property."

"You're an animal working in the fields the rest of your life."

"You don't have any rights, we own you."

Not exactly what you'd want yelled at a group of middle-schoolers on an overnight field trip. But those phrases -- plus others involving the N-word -- are exactly what a class of Connecticut seventh-graders say was shouted at them during a nighttime slavery re-enactment, which the students and their parents were unaware would be a part of the trip.

The "Underground Railroad" activity took place on the third night of the group's four-day visit to Nature's Classroom in Charlton, Massachusetts. The role-playing simulation involved a mock slave ship experience, during which children were crammed into a dark room and told to imagine they'd just watched as their father was killed and that they might have to dance to entertain their masters.

That was followed by a plantation lesson in which the students/"slaves" were threatened and berated before being chased through the dark woods as they tried to escape to "Canada."

Sandra Baker's daughter was one of the students on the field trip. "These are innocent children who thought they were going to study nature," she told HLN. "They were tricked or basically coerced into this slavery re-enactment."

Tuesday night, Baker and her husband brought their complaints before the Hartford Public Schools Board of Education, after she said her concerns were dismissed by the principal at her daughter's now-former school.

"For nearly a year I have been actively trying to make my concerns known through the policies and procedures available to me," she told board members. "Although it has been 10 months since my daughter shared what happened on the trip, I still find it outrageous and irresponsible."

Baker said the children were "intentionally demeaned, verbally abused and emotionally terrorized." In her testimony, she said the complaint was filed to the board to seek some sort of accountability from school leaders, "including issuing an apology, debriefing all the families affected by the trip (past and present) and reprimanding school leadership for the handling of this situation."

When contacted by HLN, Hartford Public Schools declined to comment on the matter.

In a report prepared by the school, the Hartford Magnet Trinity College Academy, other students said they were told to "Bring those n*****s to the house over there" and that they "did not feel like it was a joke, did not know if the leaders were joking."

Baker's daughter, who was 11 at the time, said, "The instructor told me if I were to run they would whip me until I bled on the floor and then either cut my Achilles so I can't run again or hang me."

All of which certainly sounds over-the-top for a group of seventh-graders. Yet not every student had a negative experience. In the same report, some of the children said it gave them "more of an awareness of the seriousness of slavery and the fight for freedom" and that it "increased understanding and consideration for others."

Nature's Classroom offers the "Underground Railroad" activity to all of its groups. It told the Connecticut State Department of Education that 99 percent of groups elect to do it. And Baker said Hartford Magnet Trinity College Academy students have gone on the field trip for several years and previously participated in the re-enactment.

The Department of Education met with leaders from Nature's Classroom earlier this year in response to the Bakers' complaint. They were told the activity's goal is "to encourage students to think and act in ways that Africans trying to escape slavery thought and acted," though they also found there were "no clear instructions for staff regarding appropriate or inappropriate language or actions, or caution around possible emotional and/or psychological effects -- particularly when students of color participate."

The program's director, Dr. John G. Santos, said Nature's Classroom does not have adequate funding for that type of additional support and relies on the participating schools to prepare their students for the experience and discuss it with them afterward.

But Sandra Baker said she thinks the problem is putting middle-schoolers through any activity that requires an emotional debriefing in the first place. She said it would be terrifying for any children to have strangers screaming at them in the dark and making them run through the woods at night, no matter what the context or color of the children's skin.

"Children who were not kids of color were terrorized by this, what they're calling an educational experience. These are children. These are people's kids. And they did it without consent of the parents."

And had Baker known about the re-enactment beforehand, she said, "We would never have sent our daughter on this trip."