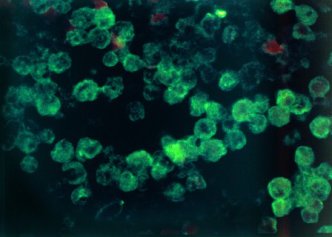 Tests of a Louisiana parish's water supply confirmed the presence of a rare brain-eating amoeba blamed for last month's death of a 4-year-old boy.

The water is safe to drink, state officials said, although they cautioned against getting water in the nose.

Naegleria fowleri is found in hot springs and warm fresh water, most often in the Southeastern United States. The amoeba enters the body through the nose and travels to the brain. There is no danger of infection from drinking or cooking with contaminated water, the CDC said. Infected patients are diagnosed with primary amoebic meningoencephalitis.

A Mississippi boy who had played on a water slide made out of a long sheet of plastic while visiting St. Bernard Parish contracted amoebic meningoencephalitis and died last month. Tests at the home where he was playing found the Naegleria fowleri amoeba.

Officials said less than 1% of patients survive the deadly brain infection caused by this amoeba. But an experimental drug from the CDC has shown promise in fighting it. Kali Hardig, a 12-year-old in Arkansas, survived after contracting the amoeba in July, possibly at a Little Rock, Arkansas, water park.

Doctors credited Kali's mom, Traci Hardig, with her survival, saying she brought her daughter to the hospital early and pushed for more tests.

"If you believe that there's something more wrong with your daughter or your son than a simple virus or stomach flu, stay in there, hang in there," Hardig told CNN. "Talk to the doctor ... and reassure them that this is not a normal illness."

The first symptoms of primary amoebic meningoencephalitis appear one to seven days after infection, including headache, fever, nausea, vomiting and a stiff neck, according to the CDC.

"Later symptoms include confusion, lack of attention to people and surroundings, loss of balance, seizures and hallucinations," the government agency's website says. "After the start of symptoms, the disease progresses rapidly and usually causes death within one to 12 days."

Here are some tips from the CDC to help lower the risk of infection:

• Avoid swimming in fresh water when the water temperature is high and the water level is low.

• Hold your nose shut or use nose clips while swimming.

• Avoid stirring up the sediment while wading in shallow, warm freshwater areas.

• If you are irrigating, flushing or rinsing your sinuses (for example, by using a neti pot), use water that has been distilled or sterilized.

CNN's Jacque Wilson and Joe Sutton contributed to this report.