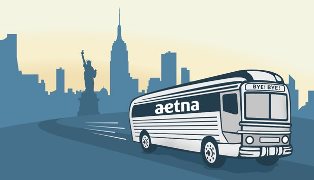 NEW YORK (CNNMoney) -- When Americans start shopping on the state-based exchanges next month, a couple of big insurers will likely be MIA.

Several of the larger players, including Aetna, UnitedHealthcare and Cigna, are treading cautiously into Obamacare, waiting to see how the start of the massive health care reform pans out in 2014.

Among the concerns is the fear that unhealthy Americans who previously could not obtain coverage will flood the exchanges and run up large health care bills.

"There are a lot of unknowns of who will actually enroll and what their needs will be," said Christine Monahan, a former senior health policy analyst with Georgetown's Center on Health Insurance Reforms. "A lot of major, for-profit [insurers] have less tolerance for losses and risk."

Aetna has actually pulled out of at least five exchanges after submitting proposals in 14 states. Its policies will not be found on the exchanges in Maryland, New York, Georgia, Ohio or its home state of Connecticut. The insurer recently bought Coventry Health Plans, which had also filed to be on several state exchanges, so Aetna is now reviewing both companies' remaining fillings.

"We believe it is critical that our plans not only be competitive, but also financially viable, in order to meet the long-term needs of the exchanges in which we choose to participate," the company said last month after withdrawing from the New York exchange. It will offer individual plans outside of Obamacare in the Empire State.

UnitedHealthcare is also planning limited participation in the new exchanges, at least for 2014. The company said it is taking its time to evaluate the exchanges, which it believes have the potential to be a growth market. It is only participating in about a dozen exchanges next year.

"[We] see 2014 as just the very start of the exchange markets," said spokesman Tyler Mason.

For Cigna, the decision came down to its customer base. A giant player in the employer market, Cigna is relatively new to the individual insurance side of the business. So it decided to join the exchanges in only the five states where it writes 80% of its individual policies, said spokesman Joseph Mondy. But Cigna will continue to offer plans outside the exchange in all 10 states where it is involved in the individual market.

These cautious moves contrast sharply with a company such as WellPoint, a Blue Cross Blue Shield licensee that's embracing the exchanges. It plans to be involved in each of its 14 states as "essential players," a spokeswoman said.

The absence of many larger insurers on the exchange isn't necessarily a bad thing for consumers, said Alan Weil, executive director of the National Academy for State Health Policy. The exchanges, which will include many smaller regional players and companies that have catered mainly to the Medicaid market, are expected to be very competitive in terms of premiums.

Smaller insurers, however, may not have as extensive a list of doctors and hospitals in their networks, he said. But that's one of the tradeoffs for affordability.

"What brand of insurance is available on the exchange does not concern me a lot," Weil said.